“Since 2006, value stocks (IVE vs IVW) have underperformed 11 of the 13 calendar years and when they beat growth, it wasn’t by much. Cumulatively, through this week, it has been a 122% differential (up 52% for value vs up 174% for growth). This appears to be the longest and most severe drought for value investors since data collection began. It will go our way eventually as there are too many people paying far too much for today’s darlings, both public and private. Further, the ten-year yield of 2.5% (pre-tax) isn’t attractive nor is real estate. We believe the value part of the global equity market is the only place to earn solid risk adjusted returns and we believe those returns will be higher than normal,” said Vilas Fund in its Q1 investor letter. We aren’t sure whether value stocks outperform growth, but we follow hedge fund investor letters to understand where the markets and stocks might be going. That’s why we believe it would be worthwhile to take a look at the hedge fund sentiment on Helius Medical Technologies, Inc. (NASDAQ:HSDT) in order to identify whether reputable and successful top money managers continue to believe in its potential.

Helius Medical Technologies, Inc. (NASDAQ:HSDT) shares haven’t seen a lot of action during the third quarter. Overall, hedge fund sentiment was unchanged. The stock was in 4 hedge funds’ portfolios at the end of the third quarter of 2019. The level and the change in hedge fund popularity aren’t the only variables you need to analyze to decipher hedge funds’ perspectives. A stock may witness a boost in popularity but it may still be less popular than similarly priced stocks. That’s why at the end of this article we will examine companies such as Tandy Leather Factory, Inc. (NASDAQ:TLF), VIVUS, Inc. (NASDAQ:VVUS), and Pier 1 Imports, Inc. (NYSE:PIR) to gather more data points. Our calculations also showed that HSDT isn’t among the 30 most popular stocks among hedge funds (click for Q3 rankings and see the video below for Q2 rankings).

According to most investors, hedge funds are seen as underperforming, outdated financial tools of the past. While there are more than 8000 funds with their doors open today, We hone in on the crème de la crème of this club, about 750 funds. These money managers have their hands on the majority of the smart money’s total asset base, and by watching their finest picks, Insider Monkey has brought to light several investment strategies that have historically defeated the broader indices. Insider Monkey’s flagship short hedge fund strategy outstripped the S&P 500 short ETFs by around 20 percentage points per annum since its inception in May 2014. Our portfolio of short stocks lost 27.8% since February 2017 (through November 21st) even though the market was up more than 39% during the same period. We just shared a list of 7 short targets in our latest quarterly update .

We leave no stone unturned when looking for the next great investment idea. For example Discover is offering this insane cashback card, so we look into shorting the stock. One of the most bullish analysts in America just put his money where his mouth is. He says, “I’m investing more today than I did back in early 2009.” So we check out his pitch. We read hedge fund investor letters and listen to stock pitches at hedge fund conferences. We even check out this option genius’ weekly trade ideas. This December, we recommended Adams Energy as a one-way bet based on an under-the-radar fund manager’s investor letter and the stock already gained 20 percent. With all of this in mind we’re going to take a glance at the key hedge fund action surrounding Helius Medical Technologies, Inc. (NASDAQ:HSDT).

How have hedgies been trading Helius Medical Technologies, Inc. (NASDAQ:HSDT)?

At Q3’s end, a total of 4 of the hedge funds tracked by Insider Monkey were long this stock, a change of 0% from one quarter earlier. By comparison, 0 hedge funds held shares or bullish call options in HSDT a year ago. With hedgies’ capital changing hands, there exists a select group of noteworthy hedge fund managers who were increasing their stakes substantially (or already accumulated large positions). 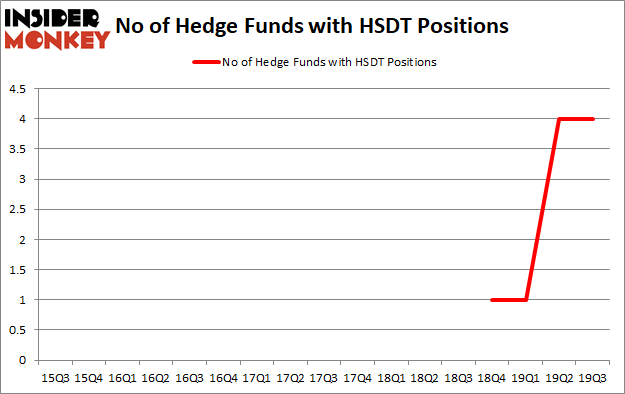 According to Insider Monkey’s hedge fund database, Israel Englander’s Millennium Management has the largest position in Helius Medical Technologies, Inc. (NASDAQ:HSDT), worth close to $0.3 million, corresponding to less than 0.1%% of its total 13F portfolio. On Millennium Management’s heels is Donald Sussman of Paloma Partners, with a $0.1 million position; the fund has less than 0.1%% of its 13F portfolio invested in the stock. Remaining peers that hold long positions consist of Ben Levine, Andrew Manuel and Stefan Renold’s LMR Partners, Renaissance Technologies and . In terms of the portfolio weights assigned to each position Paloma Partners allocated the biggest weight to Helius Medical Technologies, Inc. (NASDAQ:HSDT), around 0.0022% of its 13F portfolio. LMR Partners is also relatively very bullish on the stock, dishing out 0.0016 percent of its 13F equity portfolio to HSDT.

Since Helius Medical Technologies, Inc. (NASDAQ:HSDT) has witnessed a decline in interest from hedge fund managers, logic holds that there is a sect of hedgies who were dropping their entire stakes in the third quarter. Interestingly, Brian Ashford-Russell and Tim Woolley’s Polar Capital said goodbye to the biggest investment of the “upper crust” of funds watched by Insider Monkey, worth an estimated $0.6 million in stock, and Andrew Weiss’s Weiss Asset Management was right behind this move, as the fund said goodbye to about $0.1 million worth. These moves are important to note, as total hedge fund interest stayed the same (this is a bearish signal in our experience).

As you can see these stocks had an average of 2 hedge funds with bullish positions and the average amount invested in these stocks was $5 million. That figure was $1 million in HSDT’s case. Tandy Leather Factory, Inc. (NASDAQ:TLF) is the most popular stock in this table. On the other hand VIVUS, Inc. (NASDAQ:VVUS) is the least popular one with only 1 bullish hedge fund positions. Helius Medical Technologies, Inc. (NASDAQ:HSDT) is not the most popular stock in this group but hedge fund interest is still above average. This is a slightly positive signal but we’d rather spend our time researching stocks that hedge funds are piling on. Our calculations showed that top 20 most popular stocks among hedge funds returned 37.4% in 2019 through the end of November and outperformed the S&P 500 ETF (SPY) by 9.9 percentage points. Unfortunately HSDT wasn’t nearly as popular as these 20 stocks and hedge funds that were betting on HSDT were disappointed as the stock returned -68.5% during the fourth quarter (through the end of November) and underperformed the market. If you are interested in investing in large cap stocks with huge upside potential, you should check out the top 20 most popular stocks among hedge funds as many of these stocks already outperformed the market so far this year.