How do you pick the next stock to invest in? One way would be to spend days of research browsing through thousands of publicly traded companies. However, an easier way is to look at the stocks that smart money investors are collectively bullish on. Hedge funds and other institutional investors usually invest large amounts of capital and have to conduct due diligence while choosing their next pick. They don’t always get it right, but, on average, their stock picks historically generated strong returns after adjusting for known risk factors. With this in mind, let’s take a look at the recent hedge fund activity surrounding Five Below Inc (NASDAQ:FIVE).

Hedge fund interest in Five Below Inc (NASDAQ:FIVE) shares was flat at the end of last quarter. This is usually a negative indicator. At the end of this article we will also compare FIVE to other stocks including Proofpoint Inc (NASDAQ:PFPT), SL Green Realty Corp (NYSE:SLG), and HD Supply Holdings Inc (NASDAQ:HDS) to get a better sense of its popularity. Our calculations also showed that Five Below isn’t among the 30 most popular stocks among hedge funds (see the video below).

Unlike this former hedge fund manager who is convinced Dow will soar past 40000, our long-short investment strategy doesn’t rely on bull markets to deliver double digit returns. We only rely on hedge fund buy/sell signals. Let’s take a gander at the latest hedge fund action encompassing Five Below Inc (NASDAQ:FIVE).

At the end of the second quarter, a total of 38 of the hedge funds tracked by Insider Monkey were bullish on this stock, a change of 0% from the first quarter of 2019. Below, you can check out the change in hedge fund sentiment towards FIVE over the last 16 quarters. With hedge funds’ positions undergoing their usual ebb and flow, there exists an “upper tier” of key hedge fund managers who were boosting their holdings considerably (or already accumulated large positions). 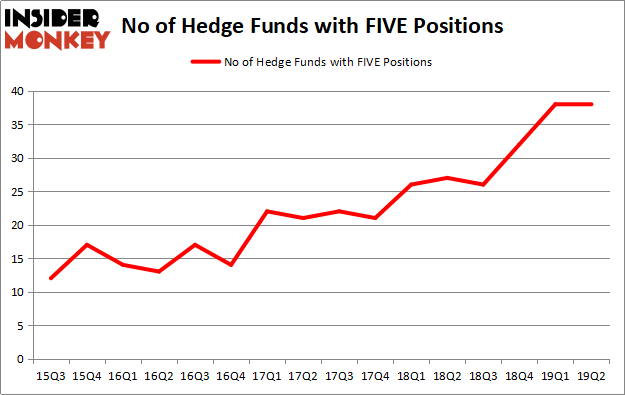 Among these funds, Millennium Management held the most valuable stake in Five Below Inc (NASDAQ:FIVE), which was worth $79.9 million at the end of the second quarter. On the second spot was Renaissance Technologies which amassed $64.8 million worth of shares. Moreover, Junto Capital Management, Point72 Asset Management, and Hitchwood Capital Management were also bullish on Five Below Inc (NASDAQ:FIVE), allocating a large percentage of their portfolios to this stock.

Judging by the fact that Five Below Inc (NASDAQ:FIVE) has witnessed falling interest from hedge fund managers, it’s safe to say that there exists a select few hedge funds that slashed their full holdings in the second quarter. It’s worth mentioning that Andrew Feldstein and Stephen Siderow’s Blue Mountain Capital dumped the largest stake of the “upper crust” of funds watched by Insider Monkey, comprising close to $12.3 million in call options. Benjamin A. Smith’s fund, Laurion Capital Management, also dropped its call options, about $2.5 million worth. These bearish behaviors are important to note, as total hedge fund interest stayed the same (this is a bearish signal in our experience).

As you can see these stocks had an average of 24 hedge funds with bullish positions and the average amount invested in these stocks was $554 million. That figure was $550 million in FIVE’s case. Proofpoint Inc (NASDAQ:PFPT) is the most popular stock in this table. On the other hand SL Green Realty Corp (NYSE:SLG) is the least popular one with only 15 bullish hedge fund positions. Compared to these stocks Five Below Inc (NASDAQ:FIVE) is more popular among hedge funds. Our calculations showed that top 20 most popular stocks among hedge funds returned 24.4% in 2019 through September 30th and outperformed the S&P 500 ETF (SPY) by 4 percentage points. Hedge funds were also right about betting on FIVE, though not to the same extent, as the stock returned 5.1% during the third quarter and outperformed the market as well.