Hedge fund managers like David Einhorn, Bill Ackman, or Carl Icahn became billionaires through reaping large profits for their investors, which is why piggybacking their stock picks may provide us with significant returns as well. Many hedge funds, like Paul Singer’s Elliott Management, are pretty secretive, but we can still get some insights by analyzing their quarterly 13F filings. One of the most fertile grounds for large abnormal returns is hedge funds’ most popular small-cap picks, which are not so widely followed and often trade at a discount to their intrinsic value. In this article we will check out hedge fund activity in another small-cap stock: First Bancorp (NASDAQ:FBNC).

First Bancorp (NASDAQ:FBNC) shares haven’t seen a lot of action during the third quarter. Overall, hedge fund sentiment was unchanged. The stock was in 16 hedge funds’ portfolios at the end of the fourth quarter of 2018. The level and the change in hedge fund popularity aren’t the only variables you need to analyze to decipher hedge funds’ perspectives. A stock may witness a boost in popularity but it may still be less popular than similarly priced stocks. That’s why at the end of this article we will examine companies such as Party City Holdco Inc (NYSE:PRTY), Archrock, Inc. (NYSE:AROC), and Stratasys, Ltd. (NASDAQ:SSYS) to gather more data points.

We’re going to take a glance at the key hedge fund action regarding First Bancorp (NASDAQ:FBNC). 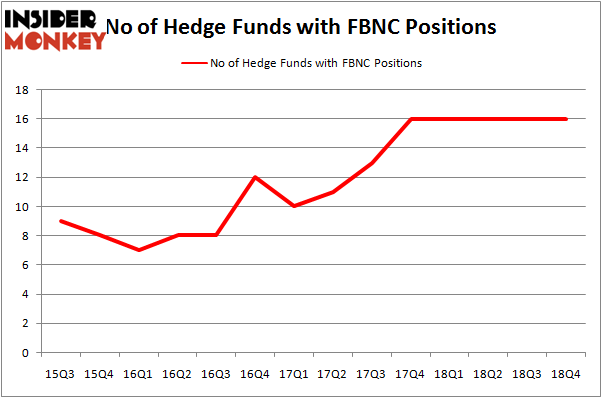 More specifically, Mendon Capital Advisors was the largest shareholder of First Bancorp (NASDAQ:FBNC), with a stake worth $31.2 million reported as of the end of December. Trailing Mendon Capital Advisors was Renaissance Technologies, which amassed a stake valued at $21.7 million. Millennium Management, Forest Hill Capital, and Castine Capital Management were also very fond of the stock, giving the stock large weights in their portfolios.

Seeing as First Bancorp (NASDAQ:FBNC) has faced a decline in interest from the entirety of the hedge funds we track, logic holds that there was a specific group of hedge funds that elected to cut their full holdings in the third quarter. At the top of the heap, Joe DiMenna’s ZWEIG DIMENNA PARTNERS dropped the biggest position of the “upper crust” of funds watched by Insider Monkey, comprising close to $3.5 million in stock, and Ken Griffin’s Citadel Investment Group was right behind this move, as the fund dumped about $1.1 million worth. These moves are intriguing to say the least, as total hedge fund interest stayed the same (this is a bearish signal in our experience).

As you can see these stocks had an average of 17.25 hedge funds with bullish positions and the average amount invested in these stocks was $72 million. That figure was $95 million in FBNC’s case. Archrock, Inc. (NYSE:AROC) is the most popular stock in this table. On the other hand Stratasys, Ltd. (NASDAQ:SSYS) is the least popular one with only 14 bullish hedge fund positions. First Bancorp (NASDAQ:FBNC) is not the least popular stock in this group but hedge fund interest is still below average. This is a slightly negative signal and we’d rather spend our time researching stocks that hedge funds are piling on. Our calculations showed that top 15 most popular stocks) among hedge funds returned 24.2% through April 22nd and outperformed the S&P 500 ETF (SPY) by more than 7 percentage points. Unfortunately FBNC wasn’t nearly as popular as these 15 stock (hedge fund sentiment was quite bearish); FBNC investors were disappointed as the stock returned 10.9% and underperformed the market. If you are interested in investing in large cap stocks with huge upside potential, you should check out the top 15 most popular stocks) among hedge funds as 13 of these stocks already outperformed the market this year.