Ferrari N.V. (NYSE:RACE) investors should be aware of an increase in enthusiasm from smart money lately. RACE was in 30 hedge funds’ portfolios at the end of June. There were 28 hedge funds in our database with RACE holdings at the end of the previous quarter. Our calculations also showed that RACE isn’t among the 30 most popular stocks among hedge funds (see the video at the end of this article).

Unlike some fund managers who are betting on Dow reaching 40000 in a year, our long-short investment strategy doesn’t rely on bull markets to deliver double digit returns. We only rely on hedge fund buy/sell signals. We’re going to analyze the fresh hedge fund action regarding Ferrari N.V. (NYSE:RACE).

At Q2’s end, a total of 30 of the hedge funds tracked by Insider Monkey were long this stock, a change of 7% from the previous quarter. On the other hand, there were a total of 27 hedge funds with a bullish position in RACE a year ago. With hedge funds’ sentiment swirling, there exists a select group of noteworthy hedge fund managers who were increasing their holdings considerably (or already accumulated large positions). 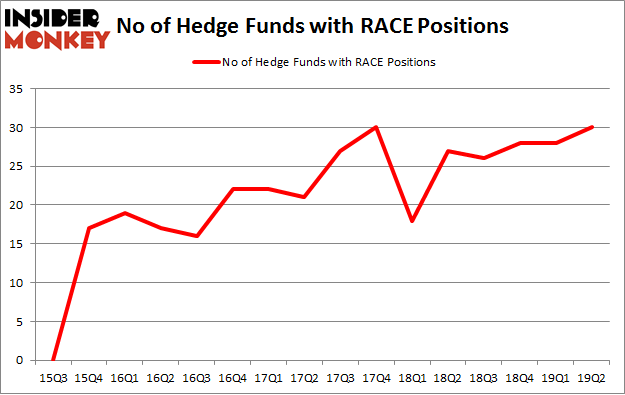 As one would reasonably expect, specific money managers have been driving this bullishness. Newbrook Capital Advisors, managed by Robert Boucai, created the biggest position in Ferrari N.V. (NYSE:RACE). Newbrook Capital Advisors had $20.1 million invested in the company at the end of the quarter. Michael Platt and William Reeves’s BlueCrest Capital Mgmt. also made a $1 million investment in the stock during the quarter. The following funds were also among the new RACE investors: Michael Gelband’s ExodusPoint Capital, David E. Shaw’s D E Shaw, and Elise Di Vincenzo Crumbine’s Stormborn Capital Management.

Let’s now take a look at hedge fund activity in other stocks similar to Ferrari N.V. (NYSE:RACE). We will take a look at Koninklijke Philips N.V. (NYSE:PHG), Tesla Inc. (NASDAQ:TSLA), The Travelers Companies Inc (NYSE:TRV), and Worldpay, Inc. (NYSE:WP). All of these stocks’ market caps are closest to RACE’s market cap.

As you can see these stocks had an average of 38.75 hedge funds with bullish positions and the average amount invested in these stocks was $2021 million. That figure was $1266 million in RACE’s case. Worldpay, Inc. (NYSE:WP) is the most popular stock in this table. On the other hand Koninklijke Philips N.V. (NYSE:PHG) is the least popular one with only 8 bullish hedge fund positions. Ferrari N.V. (NYSE:RACE) is not the least popular stock in this group but hedge fund interest is still below average. This is a slightly negative signal and we’d rather spend our time researching stocks that hedge funds are piling on. Our calculations showed that top 20 most popular stocks among hedge funds returned 24.4% in 2019 through September 30th and outperformed the S&P 500 ETF (SPY) by 4 percentage points. Unfortunately RACE wasn’t nearly as popular as these 20 stocks (hedge fund sentiment was quite bearish); RACE investors were disappointed as the stock returned -4.5% during the third quarter and underperformed the market. If you are interested in investing in large cap stocks with huge upside potential, you should check out the top 20 most popular stocks among hedge funds as many of these stocks already outperformed the market so far in 2019.