Concerns over rising interest rates and expected further rate increases have hit several stocks hard during the fourth quarter of 2018. Trends reversed 180 degrees during the first half of 2019 amid Powell’s pivot and optimistic expectations towards a trade deal with China. Hedge funds and institutional investors tracked by Insider Monkey usually invest a disproportionate amount of their portfolios in smaller cap stocks. We have been receiving indications that hedge funds were increasing their overall exposure in the second quarter and this is one of the factors behind the recent movements in major indices. In this article, we will take a closer look at hedge fund sentiment towards CVB Financial Corp. (NASDAQ:CVBF).

Hedge fund interest in CVB Financial Corp. (NASDAQ:CVBF) shares was flat at the end of last quarter. This is usually a negative indicator. The level and the change in hedge fund popularity aren’t the only variables you need to analyze to decipher hedge funds’ perspectives. A stock may witness a boost in popularity but it may still be less popular than similarly priced stocks. That’s why at the end of this article we will examine companies such as Kennametal Inc. (NYSE:KMT), Monro, Inc. (NASDAQ:MNRO), and Old National Bancorp (NYSE:ONB) to gather more data points. Our calculations also showed that CVBF isn’t among the 30 most popular stocks among hedge funds (view the video below).

At Q2’s end, a total of 12 of the hedge funds tracked by Insider Monkey held long positions in this stock, a change of 0% from the first quarter of 2019. Below, you can check out the change in hedge fund sentiment towards CVBF over the last 16 quarters. With hedgies’ sentiment swirling, there exists a few key hedge fund managers who were upping their stakes considerably (or already accumulated large positions). 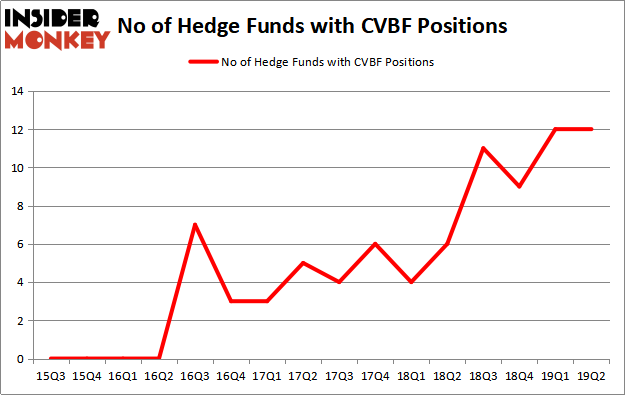 More specifically, Citadel Investment Group was the largest shareholder of CVB Financial Corp. (NASDAQ:CVBF), with a stake worth $26.2 million reported as of the end of March. Trailing Citadel Investment Group was Renaissance Technologies, which amassed a stake valued at $10.5 million. Balyasny Asset Management, D E Shaw, and GLG Partners were also very fond of the stock, giving the stock large weights in their portfolios.

Since CVB Financial Corp. (NASDAQ:CVBF) has faced declining sentiment from the smart money, we can see that there was a specific group of fund managers that slashed their full holdings in the second quarter. Interestingly, Israel Englander’s Millennium Management sold off the largest stake of all the hedgies tracked by Insider Monkey, worth close to $1 million in stock. Michael Gelband’s fund, ExodusPoint Capital, also said goodbye to its stock, about $0.6 million worth. These moves are intriguing to say the least, as total hedge fund interest stayed the same (this is a bearish signal in our experience).

Let’s go over hedge fund activity in other stocks – not necessarily in the same industry as CVB Financial Corp. (NASDAQ:CVBF) but similarly valued. We will take a look at Kennametal Inc. (NYSE:KMT), Monro, Inc. (NASDAQ:MNRO), Old National Bancorp (NASDAQ:ONB), and EnerSys (NYSE:ENS). This group of stocks’ market valuations are similar to CVBF’s market valuation.

As you can see these stocks had an average of 15 hedge funds with bullish positions and the average amount invested in these stocks was $164 million. That figure was $61 million in CVBF’s case. Kennametal Inc. (NYSE:KMT) is the most popular stock in this table. On the other hand Old National Bancorp (NASDAQ:ONB) is the least popular one with only 10 bullish hedge fund positions. CVB Financial Corp. (NASDAQ:CVBF) is not the least popular stock in this group but hedge fund interest is still below average. This is a slightly negative signal and we’d rather spend our time researching stocks that hedge funds are piling on. Our calculations showed that top 20 most popular stocks among hedge funds returned 24.4% in 2019 through September 30th and outperformed the S&P 500 ETF (SPY) by 4 percentage points. Unfortunately CVBF wasn’t nearly as popular as these 20 stocks (hedge fund sentiment was quite bearish); CVBF investors were disappointed as the stock returned 0.1% during the third quarter and underperformed the market. If you are interested in investing in large cap stocks with huge upside potential, you should check out the top 20 most popular stocks among hedge funds as many of these stocks already outperformed the market so far in 2019.