The market has been volatile in the last few months as the Federal Reserve continued its rate cuts and uncertainty looms over trade negotiations with China. Small cap stocks have been hit hard as a result, as the Russell 2000 ETF (IWM) has underperformed the larger S&P 500 ETF (SPY) by more than 10 percentage points over the last 12 months. SEC filings and hedge fund investor letters indicate that the smart money seems to be paring back their overall long exposure since summer months, though some funds increased their exposure dramatically at the end of Q2 and the beginning of Q3. In this article, we analyze what the smart money thinks of Cousins Properties Incorporated (NYSE:CUZ) and find out how it is affected by hedge funds’ moves.

Hedge fund interest in Cousins Properties Incorporated (NYSE:CUZ) shares was flat at the end of last quarter. This is usually a negative indicator. At the end of this article we will also compare CUZ to other stocks including Synovus Financial Corp. (NYSE:SNV), Brixmor Property Group Inc (NYSE:BRX), and Bilibili Inc. (NASDAQ:BILI) to get a better sense of its popularity.

To the average investor there are a multitude of signals shareholders put to use to grade stocks. A pair of the less utilized signals are hedge fund and insider trading signals. Our experts have shown that, historically, those who follow the top picks of the best money managers can outperform their index-focused peers by a superb amount (see the details here).

Unlike some fund managers who are betting on Dow reaching 40000 in a year, our long-short investment strategy doesn’t rely on bull markets to deliver double digit returns. We only rely on hedge fund buy/sell signals. Let’s take a look at the recent hedge fund action surrounding Cousins Properties Incorporated (NYSE:CUZ). 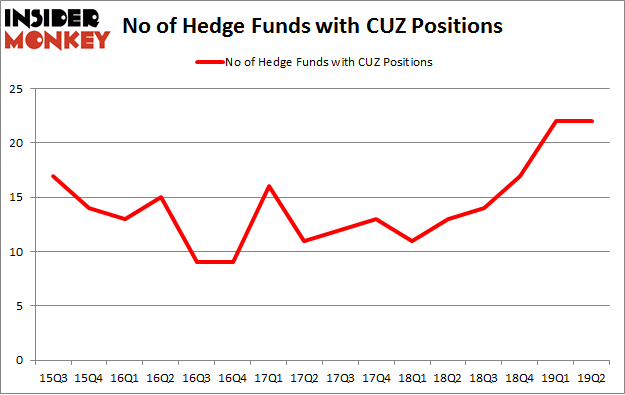 Among these funds, Millennium Management held the most valuable stake in Cousins Properties Incorporated (NYSE:CUZ), which was worth $68.7 million at the end of the second quarter. On the second spot was Renaissance Technologies which amassed $50.5 million worth of shares. Moreover, D E Shaw, GLG Partners, and Shoals Capital Management were also bullish on Cousins Properties Incorporated (NYSE:CUZ), allocating a large percentage of their portfolios to this stock.

Seeing as Cousins Properties Incorporated (NYSE:CUZ) has faced declining sentiment from the aggregate hedge fund industry, logic holds that there was a specific group of hedgies that slashed their full holdings in the second quarter. It’s worth mentioning that Eduardo Abush’s Waterfront Capital Partners dropped the largest stake of the 750 funds tracked by Insider Monkey, totaling about $6.9 million in stock, and Minhua Zhang’s Weld Capital Management was right behind this move, as the fund said goodbye to about $2.7 million worth. These transactions are interesting, as aggregate hedge fund interest stayed the same (this is a bearish signal in our experience).

As you can see these stocks had an average of 26.75 hedge funds with bullish positions and the average amount invested in these stocks was $411 million. That figure was $221 million in CUZ’s case. Synovus Financial Corp. (NYSE:SNV) is the most popular stock in this table. On the other hand Brixmor Property Group Inc (NYSE:BRX) is the least popular one with only 15 bullish hedge fund positions. Cousins Properties Incorporated (NYSE:CUZ) is not the least popular stock in this group but hedge fund interest is still below average. Our calculations showed that top 20 most popular stocks (view the video below) among hedge funds returned 24.4% in 2019 through September 30th and outperformed the S&P 500 ETF (SPY) by 4 percentage points. A small number of hedge funds were also right about betting on CUZ, though not to the same extent, as the stock returned 4.7% during the third quarter and outperformed the market.