We can judge whether Consolidated Edison, Inc. (NYSE:ED) is a good investment right now by following the lead of some of the best investors in the world and piggybacking their ideas. There’s no better way to get these firms’ immense resources and analytical capabilities working for us than to follow their lead into their best ideas. While not all of these picks will be winners, our research shows that these picks historically outperformed the market when we factor in known risk factors.

Hedge fund interest in Consolidated Edison, Inc. (NYSE:ED) shares was flat at the end of last quarter. This is usually a negative indicator. The level and the change in hedge fund popularity aren’t the only variables you need to analyze to decipher hedge funds’ perspectives. A stock may witness a boost in popularity but it may still be less popular than similarly priced stocks. That’s why at the end of this article we will examine companies such as Perusahaan Perseroan (Persero) PT Telekomunikasi Indonesia Tbk (NYSE:TLK), Atlassian Corporation Plc (NASDAQ:TEAM), and Sirius XM Holdings Inc (NASDAQ:SIRI) to gather more data points. 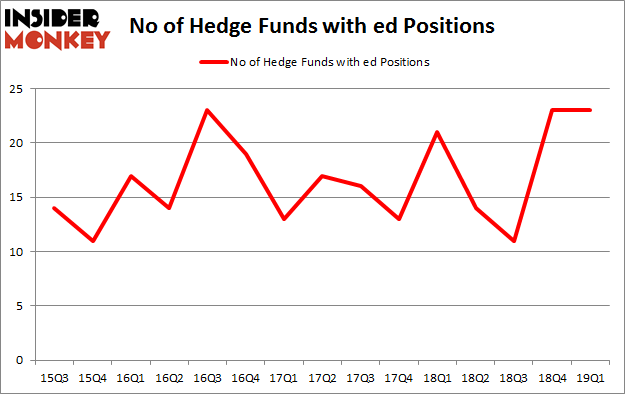 Among these funds, AQR Capital Management held the most valuable stake in Consolidated Edison, Inc. (NYSE:ED), which was worth $582.4 million at the end of the first quarter. On the second spot was Renaissance Technologies which amassed $270.2 million worth of shares. Moreover, Citadel Investment Group, D E Shaw, and Two Sigma Advisors were also bullish on Consolidated Edison, Inc. (NYSE:ED), allocating a large percentage of their portfolios to this stock.

Because Consolidated Edison, Inc. (NYSE:ED) has faced a decline in interest from the smart money, we can see that there was a specific group of funds who were dropping their entire stakes heading into Q3. At the top of the heap, Stuart J. Zimmer’s Zimmer Partners dropped the biggest investment of the 700 funds followed by Insider Monkey, valued at close to $55.4 million in stock. Phill Gross and Robert Atchinson’s fund, Adage Capital Management, also cut its stock, about $29.5 million worth. These bearish behaviors are intriguing to say the least, as total hedge fund interest stayed the same (this is a bearish signal in our experience).

As you can see these stocks had an average of 25 hedge funds with bullish positions and the average amount invested in these stocks was $1066 million. That figure was $1183 million in ED’s case. Atlassian Corporation Plc (NASDAQ:TEAM) is the most popular stock in this table. On the other hand Perusahaan Perseroan (Persero) PT Telekomunikasi Indonesia Tbk (NYSE:TLK) is the least popular one with only 9 bullish hedge fund positions. Consolidated Edison, Inc. (NYSE:ED) is not the least popular stock in this group but hedge fund interest is still below average. Our calculations showed that top 20 most popular stocks among hedge funds returned 1.9% in Q2 through May 30th and outperformed the S&P 500 ETF (SPY) by more than 3 percentage points. A small number of hedge funds were also right about betting on ED, though not to the same extent, as the stock returned 1.4% during the same time frame and outperformed the market as well.