We at Insider Monkey have gone over 730 13F filings that hedge funds and prominent investors are required to file by the SEC The 13F filings show the funds’ and investors’ portfolio positions as of June 28th. In this article, we look at what those funds think of Cohen & Steers, Inc. (NYSE:CNS) based on that data.

Is Cohen & Steers, Inc. (NYSE:CNS) going to take off soon? Hedge funds are in an optimistic mood. The number of bullish hedge fund positions rose by 6 lately. Our calculations also showed that CNS isn’t among the 30 most popular stocks among hedge funds (view the video below). CNS was in 15 hedge funds’ portfolios at the end of June. There were 9 hedge funds in our database with CNS holdings at the end of the previous quarter.

What does smart money think about Cohen & Steers, Inc. (NYSE:CNS)?

Heading into the third quarter of 2019, a total of 15 of the hedge funds tracked by Insider Monkey held long positions in this stock, a change of 67% from the previous quarter. The graph below displays the number of hedge funds with bullish position in CNS over the last 16 quarters. So, let’s see which hedge funds were among the top holders of the stock and which hedge funds were making big moves. 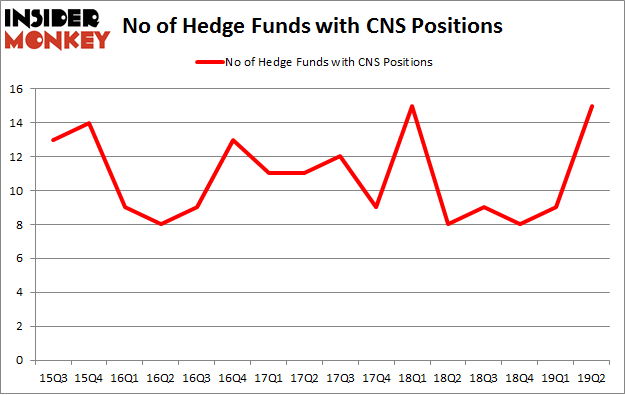 According to Insider Monkey’s hedge fund database, Mario Gabelli’s GAMCO Investors has the largest position in Cohen & Steers, Inc. (NYSE:CNS), worth close to $41.7 million, amounting to 0.3% of its total 13F portfolio. The second largest stake is held by Royce & Associates, managed by Chuck Royce, which holds a $16.4 million position; the fund has 0.1% of its 13F portfolio invested in the stock. Remaining members of the smart money that hold long positions include Renaissance Technologies, Peter Rathjens, Bruce Clarke and John Campbell’s Arrowstreet Capital and John Overdeck and David Siegel’s Two Sigma Advisors.

As you can see these stocks had an average of 18.75 hedge funds with bullish positions and the average amount invested in these stocks was $210 million. That figure was $69 million in CNS’s case. Itron, Inc. (NASDAQ:ITRI) is the most popular stock in this table. On the other hand American Equity Investment Life Holding Company (NYSE:AEL) is the least popular one with only 17 bullish hedge fund positions. Compared to these stocks Cohen & Steers, Inc. (NYSE:CNS) is even less popular than AEL. Hedge funds clearly dropped the ball on CNS as the stock delivered strong returns, though hedge funds’ consensus picks still generated respectable returns. Our calculations showed that top 20 most popular stocks among hedge funds returned 24.4% in 2019 through September 30th and outperformed the S&P 500 ETF (SPY) by 4 percentage points. A small number of hedge funds were also right about betting on CNS as the stock returned 7.5% during the third quarter and outperformed the market by an even larger margin.