“Market volatility has picked up again over the past few weeks. Headlines highlight risks regarding interest rates, the Fed, China, house prices, auto sales, trade wars, and more. Uncertainty abounds. But doesn’t it always? I have no view on whether the recent volatility will continue for a while, or whether the market will be back at all-time highs before we know it. I remain focused on preserving and growing our capital, and continue to believe that the best way to do so is via a value-driven, concentrated, patient approach. I shun consensus holdings, rich valuations, and market fads, in favor of solid, yet frequently off-the-beaten-path, businesses run by excellent, aligned management teams, purchased at deep discounts to intrinsic value,” are the words of Maran Capital’s Dan Roller. His stock picks have been beating the S&P 500 Index handily. We pay attention to what hedge funds are doing in a particular stock before considering a potential investment because it works for us. So let’s take a glance at the smart money sentiment towards CNOOC Limited (NYSE:CEO) and see how it was affected.

Hedge fund interest in CNOOC Limited (NYSE:CEO) shares was flat at the end of last quarter. This is usually a negative indicator. The level and the change in hedge fund popularity aren’t the only variables you need to analyze to decipher hedge funds’ perspectives. A stock may witness a boost in popularity but it may still be less popular than similarly priced stocks. That’s why at the end of this article we will examine companies such as Provident Financial Services, Inc. (NYSE:PFS), Solaredge Technologies Inc (NASDAQ:SEDG), and Cohen & Steers, Inc. (NYSE:CNS) to gather more data points.

To most traders, hedge funds are viewed as underperforming, outdated financial vehicles of years past. While there are over 8000 funds in operation today, Our researchers look at the bigwigs of this group, about 750 funds. These hedge fund managers orchestrate the lion’s share of all hedge funds’ total capital, and by observing their best stock picks, Insider Monkey has brought to light many investment strategies that have historically outpaced the broader indices. Insider Monkey’s flagship hedge fund strategy outrun the S&P 500 index by nearly 5 percentage points per year since its inception in May 2014 through early November 2018. We were able to generate large returns even by identifying short candidates. Our portfolio of short stocks lost 27.5% since February 2017 (through March 12th) even though the market was up nearly 25% during the same period. We just shared a list of 6 short targets in our latest quarterly update and they are already down an average of 6% in less than a month.

We’re going to take a look at the recent hedge fund action regarding CNOOC Limited (NYSE:CEO).

What does the smart money think about CNOOC Limited (NYSE:CEO)?

At the end of the fourth quarter, a total of 15 of the hedge funds tracked by Insider Monkey held long positions in this stock, a change of 0% from the second quarter of 2018. On the other hand, there were a total of 10 hedge funds with a bullish position in CEO a year ago. With hedge funds’ capital changing hands, there exists a few notable hedge fund managers who were upping their stakes considerably (or already accumulated large positions). 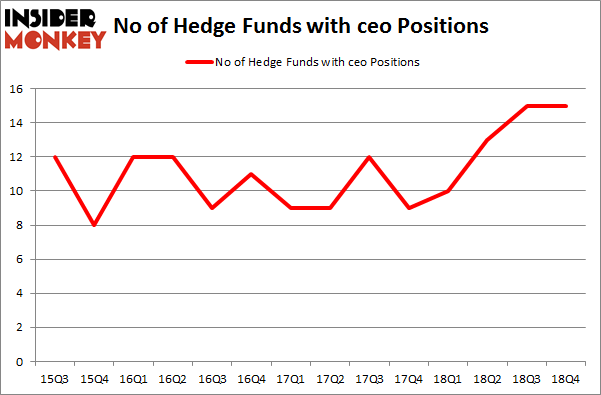 The largest stake in CNOOC Limited (NYSE:CEO) was held by Renaissance Technologies, which reported holding $105.3 million worth of stock at the end of December. It was followed by Arrowstreet Capital with a $73.5 million position. Other investors bullish on the company included Oaktree Capital Management, Horseman Capital Management, and LMR Partners.

Seeing as CNOOC Limited (NYSE:CEO) has faced a decline in interest from the aggregate hedge fund industry, it’s safe to say that there is a sect of money managers that decided to sell off their entire stakes heading into Q3. Intriguingly, Ian Cumming and Joseph Steinberg’s Leucadia National cut the largest stake of the 700 funds watched by Insider Monkey, valued at about $1 million in stock. Steve Cohen’s fund, Point72 Asia (Singapore), also dumped its stock, about $0.9 million worth. These moves are intriguing to say the least, as total hedge fund interest stayed the same (this is a bearish signal in our experience).

As you can see these stocks had an average of 16.5 hedge funds with bullish positions and the average amount invested in these stocks was $126 million. That figure was $265 million in CEO’s case. Avaya Holdings Corp. (NYSE:AVYA) is the most popular stock in this table. On the other hand Provident Financial Services, Inc. (NYSE:PFS) is the least popular one with only 8 bullish hedge fund positions. CNOOC Limited (NYSE:CEO) is not the least popular stock in this group but hedge fund interest is still below average. Our calculations showed that top 15 most popular stocks) among hedge funds returned 24.2% through April 22nd and outperformed the S&P 500 ETF (SPY) by more than 7 percentage points. A small number of hedge funds were also right about betting on CEO as the stock returned 26.7% and outperformed the market by an even larger margin.