Hedge fund interest in Chiasma Inc (NASDAQ:CHMA) shares was flat at the end of last quarter. This is usually a negative indicator. The level and the change in hedge fund popularity aren’t the only variables you need to analyze to decipher hedge funds’ perspectives. A stock may witness a boost in popularity but it may still be less popular than similarly priced stocks. That’s why at the end of this article we will examine companies such as ChannelAdvisor Corporation (NYSE:ECOM), Cambium Networks Corporation (NASDAQ:CMBM), and Arlington Asset Investment Corp (NYSE:AI) to gather more data points. Our calculations also showed that CHMA isn’t among the 30 most popular stocks among hedge funds (see the video below).

In addition to following the biggest hedge funds for investment ideas, we also share stock pitches from conferences, investor letters and other sources  like this one where the fund manager is talking about two under the radar 1000% return potential stocks: first one in internet infrastructure and the second in the heart of advertising market. We use hedge fund buy/sell signals to determine whether to conduct in-depth analysis of these stock ideas which take days. Now we’re going to go over the new hedge fund action regarding Chiasma Inc (NASDAQ:CHMA).

What does smart money think about Chiasma Inc (NASDAQ:CHMA)?

At Q2’s end, a total of 7 of the hedge funds tracked by Insider Monkey were bullish on this stock, a change of 0% from the first quarter of 2019. By comparison, 4 hedge funds held shares or bullish call options in CHMA a year ago. With the smart money’s capital changing hands, there exists a select group of notable hedge fund managers who were boosting their stakes substantially (or already accumulated large positions). 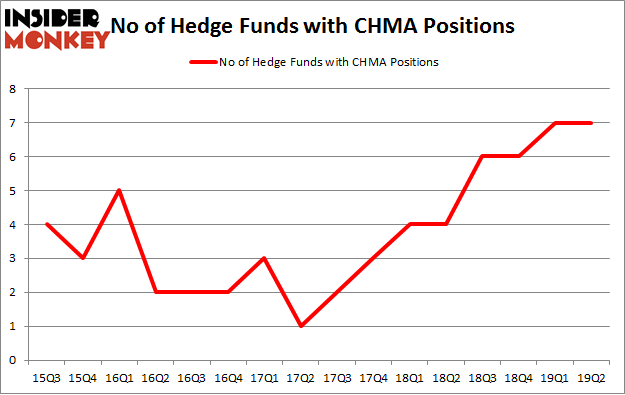 The largest stake in Chiasma Inc (NASDAQ:CHMA) was held by EcoR1 Capital, which reported holding $22.7 million worth of stock at the end of March. It was followed by Vivo Capital with a $17.8 million position. Other investors bullish on the company included Rock Springs Capital Management, Renaissance Technologies, and Ghost Tree Capital.

Because Chiasma Inc (NASDAQ:CHMA) has faced a decline in interest from the smart money, it’s safe to say that there is a sect of fund managers that slashed their entire stakes by the end of the second quarter. Interestingly, Ori Hershkovitz’s Nexthera Capital dropped the biggest position of all the hedgies watched by Insider Monkey, comprising close to $1.1 million in stock. Anand Parekh’s fund, Alyeska Investment Group, also dumped its stock, about $1 million worth. These transactions are important to note, as aggregate hedge fund interest stayed the same (this is a bearish signal in our experience).

As you can see these stocks had an average of 9.25 hedge funds with bullish positions and the average amount invested in these stocks was $20 million. That figure was $52 million in CHMA’s case. ChannelAdvisor Corporation (NYSE:ECOM) is the most popular stock in this table. On the other hand General Finance Corporation (NASDAQ:GFN) is the least popular one with only 5 bullish hedge fund positions. Chiasma Inc (NASDAQ:CHMA) is not the least popular stock in this group but hedge fund interest is still below average. This is a slightly negative signal and we’d rather spend our time researching stocks that hedge funds are piling on. Our calculations showed that top 20 most popular stocks among hedge funds returned 24.4% in 2019 through September 30th and outperformed the S&P 500 ETF (SPY) by 4 percentage points. Unfortunately CHMA wasn’t nearly as popular as these 20 stocks (hedge fund sentiment was quite bearish); CHMA investors were disappointed as the stock returned -33.7% during the third quarter and underperformed the market. If you are interested in investing in large cap stocks with huge upside potential, you should check out the top 20 most popular stocks among hedge funds as many of these stocks already outperformed the market so far in 2019.

Oakmark Funds On Humana, Baxter International and News Corp
Monthly Newsletter Strategy
Download a free copy of our newsletter and see the details inside!
Hedge Fund Resource Center
Related News
Hedge Fund and Insider Trading News: Leon Cooperman, Davidson Kempner, CQS Cayman LP, Norfolk Southern Corp. (NSC), Spirit Airlines Incorporated (SAVE), and More What is Going On With These 5 Falling Stocks? What Is Going On With These Falling Stocks? What Factors Have These 4 Stocks in Dire Straits Today? Here is What Hedge Funds Think About Chiasma Inc (CHMA) Chiasma Inc (CHMA)’s Shares Jump 35% On First Day Of Trading 5 Public Companies That Don’t Do Drug Tests in 2019 Top 10 Toughest Exams In The World 25 Largest Hedge Funds In 2019 and Their Surprising Top Stock Pick
Billionaire Hedge Funds