Casa Systems, Inc. (NASDAQ:CASA) investors should pay attention to an increase in enthusiasm from smart money lately. CASA was in 12 hedge funds’ portfolios at the end of the fourth quarter of 2018. There were 10 hedge funds in our database with CASA positions at the end of the previous quarter. Our calculations also showed that casa isn’t among the 30 most popular stocks among hedge funds.

What have hedge funds been doing with Casa Systems, Inc. (NASDAQ:CASA)?

Heading into the first quarter of 2019, a total of 12 of the hedge funds tracked by Insider Monkey held long positions in this stock, a change of 20% from one quarter earlier. The graph below displays the number of hedge funds with bullish position in CASA over the last 14 quarters. With hedge funds’ capital changing hands, there exists a select group of noteworthy hedge fund managers who were increasing their holdings significantly (or already accumulated large positions). 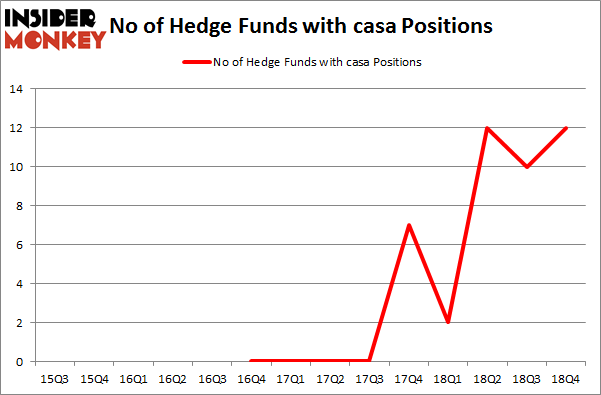 Of the funds tracked by Insider Monkey, Steve Cohen’s Point72 Asset Management has the largest position in Casa Systems, Inc. (NASDAQ:CASA), worth close to $12.7 million, corresponding to 0.1% of its total 13F portfolio. The second most bullish fund manager is John Overdeck and David Siegel of Two Sigma Advisors, with a $5.2 million position; less than 0.1%% of its 13F portfolio is allocated to the stock. Remaining peers that are bullish encompass Brian Gootzeit and Andrew Frank’s StackLine Partners, Joel Greenblatt’s Gotham Asset Management and Jim Simons’s Renaissance Technologies.

As one would reasonably expect, key hedge funds have been driving this bullishness. StackLine Partners, managed by Brian Gootzeit and Andrew Frank, created the most valuable position in Casa Systems, Inc. (NASDAQ:CASA). StackLine Partners had $3.5 million invested in the company at the end of the quarter. Jim Simons’s Renaissance Technologies also made a $1.4 million investment in the stock during the quarter. The other funds with new positions in the stock are Ken Griffin’s Citadel Investment Group, Israel Englander’s Millennium Management, and Andrew Feldstein and Stephen Siderow’s Blue Mountain Capital.

As you can see these stocks had an average of 9.75 hedge funds with bullish positions and the average amount invested in these stocks was $64 million. That figure was $29 million in CASA’s case. Atlas Air Worldwide Holdings, Inc. (NASDAQ:AAWW) is the most popular stock in this table. On the other hand Tortoise Energy Infrastructure Corporation (NYSE:TYG) is the least popular one with only 3 bullish hedge fund positions. Casa Systems, Inc. (NASDAQ:CASA) is not the most popular stock in this group but hedge fund interest is still above average. This is a slightly positive signal but we’d rather spend our time researching stocks that hedge funds are piling on. Our calculations showed that top 15 most popular stocks) among hedge funds returned 24.2% through April 22nd and outperformed the S&P 500 ETF (SPY) by more than 7 percentage points. Unfortunately CASA wasn’t nearly as popular as these 15 stock and hedge funds that were betting on CASA were disappointed as the stock returned -25.4% and underperformed the market. If you are interested in investing in large cap stocks with huge upside potential, you should check out the top 15 most popular stocks) among hedge funds as 13 of these stocks already outperformed the market this year.