Caretrus REIT Inc (NASDAQ:CTRE) shares haven’t seen a lot of action during the first quarter. Overall, hedge fund sentiment was unchanged. The stock was in 16 hedge funds’ portfolios at the end of March. At the end of this article we will also compare CTRE to other stocks including The Navigators Group, Inc (NASDAQ:NAVG), Brooks Automation, Inc. (NASDAQ:BRKS), and Patterson Companies, Inc. (NASDAQ:PDCO) to get a better sense of its popularity.

What does smart money think about Caretrus REIT Inc (NASDAQ:CTRE)?

At the end of the first quarter, a total of 16 of the hedge funds tracked by Insider Monkey were long this stock, a change of 0% from the fourth quarter of 2018. On the other hand, there were a total of 8 hedge funds with a bullish position in CTRE a year ago. With the smart money’s sentiment swirling, there exists a few notable hedge fund managers who were increasing their holdings considerably (or already accumulated large positions). 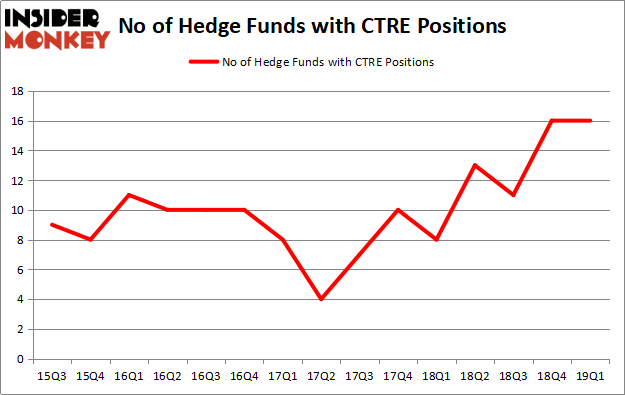 More specifically, Millennium Management was the largest shareholder of Caretrus REIT Inc (NASDAQ:CTRE), with a stake worth $37.6 million reported as of the end of March. Trailing Millennium Management was Renaissance Technologies, which amassed a stake valued at $23.4 million. AEW Capital Management, Two Sigma Advisors, and D E Shaw were also very fond of the stock, giving the stock large weights in their portfolios.

Because Caretrus REIT Inc (NASDAQ:CTRE) has experienced falling interest from hedge fund managers, it’s safe to say that there were a few fund managers that decided to sell off their positions entirely in the third quarter. Interestingly, Richard Driehaus’s Driehaus Capital said goodbye to the biggest stake of the “upper crust” of funds tracked by Insider Monkey, totaling close to $3.4 million in stock. Paul Marshall and Ian Wace’s fund, Marshall Wace LLP, also dumped its stock, about $0.6 million worth. These moves are interesting, as total hedge fund interest stayed the same (this is a bearish signal in our experience).

As you can see these stocks had an average of 18.5 hedge funds with bullish positions and the average amount invested in these stocks was $192 million. That figure was $109 million in CTRE’s case. Patterson Companies, Inc. (NASDAQ:PDCO) is the most popular stock in this table. On the other hand Brooks Automation, Inc. (NASDAQ:BRKS) is the least popular one with only 9 bullish hedge fund positions. Caretrus REIT Inc (NASDAQ:CTRE) is not the least popular stock in this group but hedge fund interest is still below average. Our calculations showed that top 20 most popular stocks among hedge funds returned 6.2% in Q2 through June 19th and outperformed the S&P 500 ETF (SPY) by nearly 3 percentage points. A small number of hedge funds were also right about betting on CTRE as the stock returned 6.6% during the same time frame and outperformed the market by an even larger margin.