The elite funds run by legendary investors such as David Tepper and Dan Loeb make hundreds of millions of dollars for themselves and their investors by spending enormous resources doing research on small cap stocks that big investment banks don’t follow. Because of their pay structures, they have strong incentives to do the research necessary to beat the market. That’s why we pay close attention to what they think in small cap stocks. In this article, we take a closer look at Brightcove Inc (NASDAQ:BCOV) from the perspective of those elite funds.

Brightcove Inc (NASDAQ:BCOV) has experienced an increase in hedge fund interest in recent months. Our calculations also showed that BCOV isn’t among the 30 most popular stocks among hedge funds (see the video below).

How have hedgies been trading Brightcove Inc (NASDAQ:BCOV)?

At Q2’s end, a total of 18 of the hedge funds tracked by Insider Monkey were bullish on this stock, a change of 20% from the first quarter of 2019. The graph below displays the number of hedge funds with bullish position in BCOV over the last 16 quarters. With hedge funds’ positions undergoing their usual ebb and flow, there exists an “upper tier” of noteworthy hedge fund managers who were boosting their stakes substantially (or already accumulated large positions). 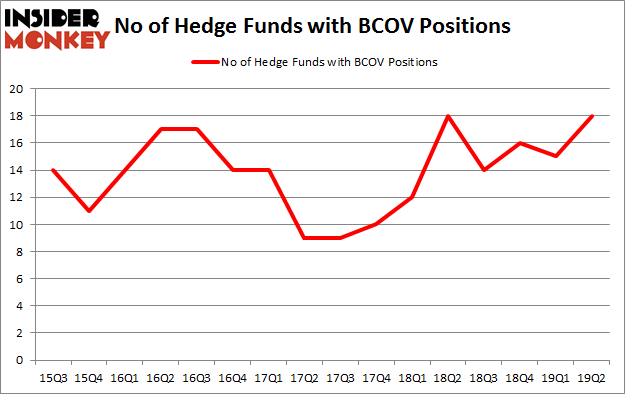 According to Insider Monkey’s hedge fund database, Douglas T. Granat’s Trigran Investments has the most valuable position in Brightcove Inc (NASDAQ:BCOV), worth close to $36.1 million, corresponding to 6% of its total 13F portfolio. Sitting at the No. 2 spot is Tenzing Global Investors, led by Chet Kapoor, holding a $30.5 million position; 16.2% of its 13F portfolio is allocated to the stock. Other professional money managers that hold long positions contain Constantinos J. Christofilis’s Archon Capital Management, Renaissance Technologies and David Brown’s Hawk Ridge Management.

As one would reasonably expect, some big names were leading the bulls’ herd. Millennium Management, managed by Israel Englander, initiated the most outsized position in Brightcove Inc (NASDAQ:BCOV). Millennium Management had $1.8 million invested in the company at the end of the quarter. David Park’s Headlands Capital also made a $1 million investment in the stock during the quarter. The only other fund with a brand new BCOV position is Minhua Zhang’s Weld Capital Management.