It seems that the masses and most of the financial media hate hedge funds and what they do, but why is this hatred of hedge funds so prominent? At the end of the day, these asset management firms do not gamble the hard-earned money of the people who are on the edge of poverty. Truth be told, most hedge fund managers and other smaller players within this industry are very smart and skilled investors. Of course, they may also make wrong bets in some instances, but no one knows what the future holds and how market participants will react to the bountiful news that floods in each day. The Standard and Poor’s 500 Index returned approximately 13.1% in the first 2.5 months of this year (including dividend payments). Conversely, hedge funds’ top 15 large-cap stock picks generated a return of 19.7% during the same 2.5-month period, with 93% of these stock picks outperforming the broader market benchmark. Coincidence? It might happen to be so, but it is unlikely. Our research covering the last 18 years indicates that hedge funds’ stock picks generate superior risk-adjusted returns. That’s why we believe it isn’t a waste of time to check out hedge fund sentiment before you invest in a stock like BioSpecifics Technologies Corp. (NASDAQ:BSTC).

Hedge fund interest in BioSpecifics Technologies Corp. (NASDAQ:BSTC) shares was flat at the end of last quarter. This is usually a negative indicator. The level and the change in hedge fund popularity aren’t the only variables you need to analyze to decipher hedge funds’ perspectives. A stock may witness a boost in popularity but it may still be less popular than similarly priced stocks. That’s why at the end of this article we will examine companies such as PennantPark Investment Corp. (NASDAQ:PNNT), United Community Financial Corp (NASDAQ:UCFC), and Hawkins, Inc. (NASDAQ:HWKN) to gather more data points.

At the moment there are plenty of tools stock traders employ to appraise their holdings. A couple of the most underrated tools are hedge fund and insider trading activity. Our researchers have shown that, historically, those who follow the best picks of the elite money managers can beat the S&P 500 by a solid amount (see the details here).

What have hedge funds been doing with BioSpecifics Technologies Corp. (NASDAQ:BSTC)? 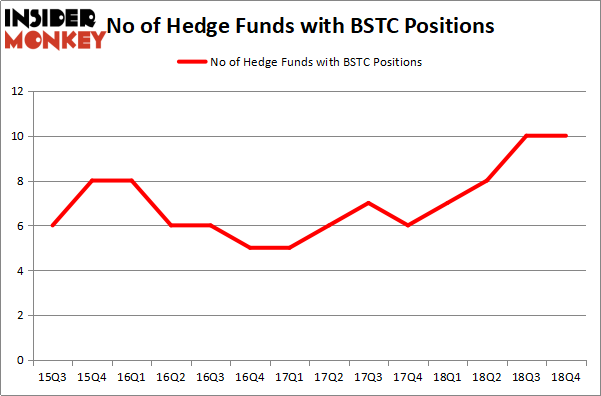 Because BioSpecifics Technologies Corp. (NASDAQ:BSTC) has witnessed falling interest from the smart money, we can see that there lies a certain “tier” of hedge funds that elected to cut their positions entirely last quarter. Intriguingly, Efrem Kamen’s Pura Vida Investments dropped the largest investment of all the hedgies monitored by Insider Monkey, comprising about $1.2 million in stock, and Ken Griffin’s Citadel Investment Group was right behind this move, as the fund said goodbye to about $0.3 million worth. These bearish behaviors are important to note, as aggregate hedge fund interest stayed the same (this is a bearish signal in our experience).

As you can see these stocks had an average of 10.25 hedge funds with bullish positions and the average amount invested in these stocks was $24 million. That figure was $43 million in BSTC’s case. New Gold Inc. (NYSEAMEX:NGD) is the most popular stock in this table. On the other hand United Community Financial Corp (NASDAQ:UCFC) is the least popular one with only 8 bullish hedge fund positions. BioSpecifics Technologies Corp. (NASDAQ:BSTC) is not the least popular stock in this group but hedge fund interest is still below average. This is a slightly negative signal and we’d rather spend our time researching stocks that hedge funds are piling on. Our calculations showed that top 15 most popular stocks) among hedge funds returned 24.2% through April 22nd and outperformed the S&P 500 ETF (SPY) by more than 7 percentage points. Unfortunately BSTC wasn’t nearly as popular as these 15 stock (hedge fund sentiment was quite bearish); BSTC investors were disappointed as the stock returned 4% and underperformed the market. If you are interested in investing in large cap stocks with huge upside potential, you should check out the top 15 most popular stocks) among hedge funds as 13 of these stocks already outperformed the market this year.

Did Hedge Funds Drop The Ball On Arvinas, Inc. (ARVN) ?
Monthly Newsletter Strategy
Download a free copy of our newsletter and see the details inside!
Hedge Fund Resource Center
Related News
Is BioSpecifics Technologies Corp. (NASDAQ:BSTC) Worthy of Your Portfolio? Is BioSpecifics Technologies Corp. (BSTC) A Good Stock To Buy Right Now? Do These Companies’ Insiders Fear A Grim Future For Their Stocks? Should You Follow This Investor Into His Biotech Picks? Discovery Laboratories, Inc. (DSCO): Are Hedge Funds Right About This Stock? This Metric Says You Are Smart to Buy Vanda Pharmaceuticals Inc. (VNDA) 25 Cities with the Most Unfaithful Wives 6 Easiest Programming Languages for Middle School Students 18 Cute Tinder Bio Examples (Female)
Billionaire Hedge Funds