Is Azure Power Global Limited (NYSE:AZRE) a good stock to buy right now? We at Insider Monkey like to examine what billionaires and hedge funds think of a company before spending days of research on it. Given their 2 and 20 payment structure, hedge funds have more incentives and resources than the average investor. The funds have access to expert networks and get tips from industry insiders. They also have numerous Ivy League graduates and MBAs. Like everyone else, hedge funds perform miserably at times, but their consensus picks have historically outperformed the market after risk adjustments.

Hedge fund interest in Azure Power Global Limited (NYSE:AZRE) shares was flat at the end of last quarter. This is usually a negative indicator. At the end of this article we will also compare AZRE to other stocks including Penn Virginia Corporation (NASDAQ:PVAC), Equity Bancshares, Inc. (NASDAQ:EQBK), and Establishment Labs Holdings Inc. (NASDAQ:ESTA) to get a better sense of its popularity. Our calculations also showed that AZRE isn’t among the 30 most popular stocks among hedge funds (see the video below). 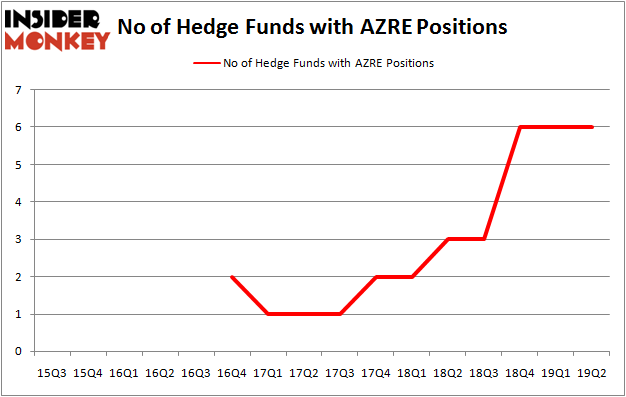 Heading into the third quarter of 2019, a total of 6 of the hedge funds tracked by Insider Monkey were bullish on this stock, a change of 0% from one quarter earlier. The graph below displays the number of hedge funds with bullish position in AZRE over the last 16 quarters. With hedgies’ sentiment swirling, there exists an “upper tier” of key hedge fund managers who were boosting their holdings significantly (or already accumulated large positions).

According to Insider Monkey’s hedge fund database, Millennium Management, managed by Israel Englander, holds the most valuable position in Azure Power Global Limited (NYSE:AZRE). Millennium Management has a $3.5 million position in the stock, comprising less than 0.1%% of its 13F portfolio. On Millennium Management’s heels is Perella Weinberg Partners, with a $3 million position; 0.1% of its 13F portfolio is allocated to the company. Other members of the smart money with similar optimism include Renaissance Technologies, Louis Bacon’s Moore Global Investments and Philip Hempleman’s Ardsley Partners.

We view hedge fund activity in the stock unfavorable, but in this case there was only a single hedge fund selling its entire position: Springbok Capital. One hedge fund selling its entire position doesn’t always imply a bearish intent. Theoretically a hedge fund may decide to sell a promising position in order to invest the proceeds in a more promising idea. However, we don’t think this is the case in this case because only one of the 800+ hedge funds tracked by Insider Monkey identified as a viable investment and initiated a position in the stock (that fund was Perella Weinberg Partners).

As you can see these stocks had an average of 11 hedge funds with bullish positions and the average amount invested in these stocks was $136 million. That figure was $10 million in AZRE’s case. Penn Virginia Corporation (NASDAQ:PVAC) is the most popular stock in this table. On the other hand Equity Bancshares, Inc. (NASDAQ:EQBK) is the least popular one with only 5 bullish hedge fund positions. Azure Power Global Limited (NYSE:AZRE) is not the least popular stock in this group but hedge fund interest is still below average. Our calculations showed that top 20 most popular stocks among hedge funds returned 24.4% in 2019 through September 30th and outperformed the S&P 500 ETF (SPY) by 4 percentage points. A small number of hedge funds were also right about betting on AZRE as the stock returned 13.7% during the same time frame and outperformed the market by an even larger margin.

Is PlayAGS, Inc. (AGS) Is Burning These Hedge Funds
Monthly Newsletter Strategy
Download a free copy of our newsletter and see the details inside!
Hedge Fund Resource Center
Related News
11 Largest Auto Insurance Companies In The US In 2019 10 Poorest Cities in America in 2019 8 Lowest Tar and Nicotine Cigarette Brands in 2019
Billionaire Hedge Funds