Agile Therapeutics Inc (NASDAQ:AGRX) was in 10 hedge funds’ portfolios at the end of September. AGRX investors should be aware of an increase in hedge fund interest recently. There were 5 hedge funds in our database with AGRX positions at the end of the previous quarter. Our calculations also showed that AGRX isn’t among the 30 most popular stocks among hedge funds (click for Q3 rankings and see the video below for Q2 rankings). 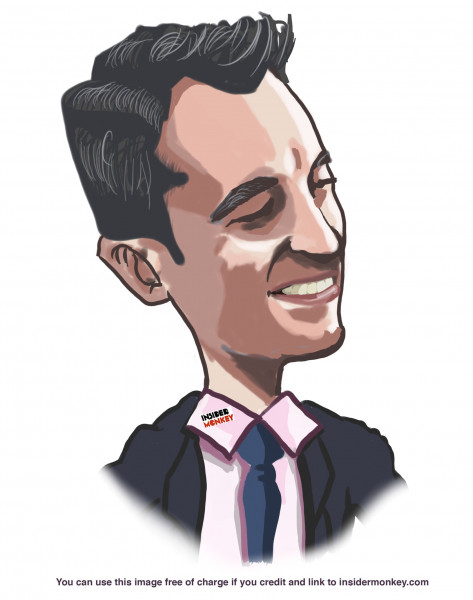 We leave no stone unturned when looking for the next great investment idea. For example Europe is set to become the world’s largest cannabis market, so we check out this European marijuana stock pitch. One of the most bullish analysts in America just put his money where his mouth is. He says, “I’m investing more today than I did back in early 2009.” So we check out his pitch. We read hedge fund investor letters and listen to stock pitches at hedge fund conferences. We also rely on the best performing hedge funds‘ buy/sell signals. Let’s review the latest hedge fund action encompassing Agile Therapeutics Inc (NASDAQ:AGRX).

What does smart money think about Agile Therapeutics Inc (NASDAQ:AGRX)?

At the end of the third quarter, a total of 10 of the hedge funds tracked by Insider Monkey were bullish on this stock, a change of 100% from one quarter earlier. Below, you can check out the change in hedge fund sentiment towards AGRX over the last 17 quarters. With hedgies’ capital changing hands, there exists a few key hedge fund managers who were adding to their stakes significantly (or already accumulated large positions). 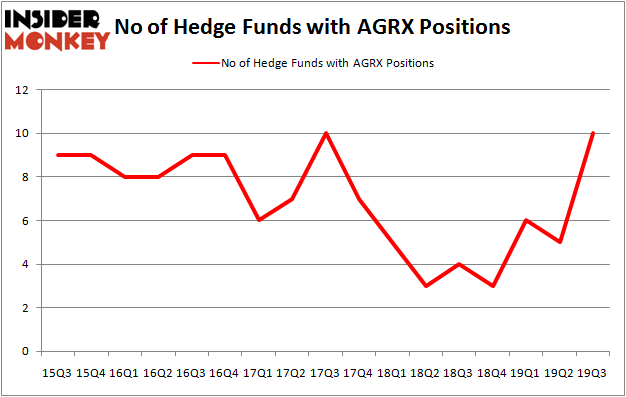 The largest stake in Agile Therapeutics Inc (NASDAQ:AGRX) was held by Perceptive Advisors, which reported holding $12.7 million worth of stock at the end of September. It was followed by Renaissance Technologies with a $2.9 million position. Other investors bullish on the company included Deerfield Management, Vivo Capital, and Eversept Partners. In terms of the portfolio weights assigned to each position Perceptive Advisors allocated the biggest weight to Agile Therapeutics Inc (NASDAQ:AGRX), around 0.34% of its 13F portfolio. Eversept Partners is also relatively very bullish on the stock, earmarking 0.34 percent of its 13F equity portfolio to AGRX.

As aggregate interest increased, some big names have jumped into Agile Therapeutics Inc (NASDAQ:AGRX) headfirst. Deerfield Management, managed by James E. Flynn, created the most valuable position in Agile Therapeutics Inc (NASDAQ:AGRX). Deerfield Management had $1.9 million invested in the company at the end of the quarter. Kamran Moghtaderi’s Eversept Partners also made a $1.1 million investment in the stock during the quarter. The other funds with new positions in the stock are Ari Zweiman’s 683 Capital Partners, Israel Englander’s Millennium Management, and John Overdeck and David Siegel’s Two Sigma Advisors.

As you can see these stocks had an average of 5.5 hedge funds with bullish positions and the average amount invested in these stocks was $8 million. That figure was $21 million in AGRX’s case. Internap Corporation (NASDAQ:INAP) is the most popular stock in this table. On the other hand Navios Maritime Containers L.P. (NASDAQ:NMCI) is the least popular one with only 3 bullish hedge fund positions. Compared to these stocks Agile Therapeutics Inc (NASDAQ:AGRX) is more popular among hedge funds. Our calculations showed that top 20 most popular stocks among hedge funds returned 37.4% in 2019 through the end of November and outperformed the S&P 500 ETF (SPY) by 9.9 percentage points. Hedge funds were also right about betting on AGRX as the stock returned 77.2% during the first two months of Q4 and outperformed the market by an even larger margin. Hedge funds were clearly right about piling into this stock relative to other stocks with similar market capitalizations.