As we already know from media reports and hedge fund investor letters, many hedge funds lost money in fourth quarter, blaming macroeconomic conditions and unpredictable events that hit several sectors, with technology among them. Nevertheless, most investors decided to stick to their bullish theses and their long-term focus allows us to profit from the recent declines. In particular, let’s take a look at what hedge funds think about ADTRAN, Inc. (NASDAQ:ADTN) in this article.

Is ADTRAN, Inc. (NASDAQ:ADTN) going to take off soon? Prominent investors are betting on the stock. The number of long hedge fund positions rose by 7 lately. Our calculations also showed that adtn isn’t among the 30 most popular stocks among hedge funds. ADTN was in 15 hedge funds’ portfolios at the end of the fourth quarter of 2018. There were 8 hedge funds in our database with ADTN holdings at the end of the previous quarter.

In the 21st century investor’s toolkit there are tons of signals market participants put to use to evaluate publicly traded companies. A couple of the most under-the-radar signals are hedge fund and insider trading activity. Our experts have shown that, historically, those who follow the top picks of the best fund managers can outpace the S&P 500 by a healthy margin (see the details here).

What have hedge funds been doing with ADTRAN, Inc. (NASDAQ:ADTN)? 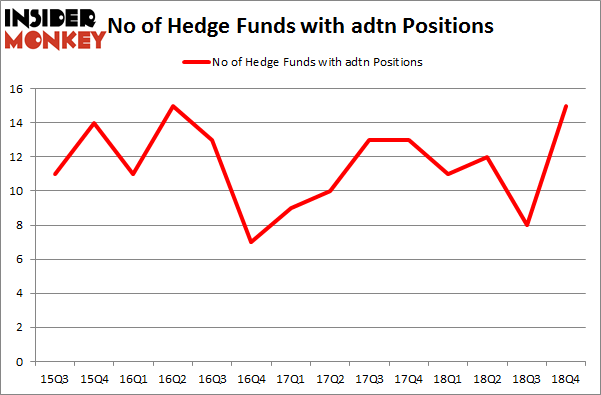 The largest stake in ADTRAN, Inc. (NASDAQ:ADTN) was held by Renaissance Technologies, which reported holding $16.6 million worth of stock at the end of December. It was followed by Royce & Associates with a $4.3 million position. Other investors bullish on the company included Millennium Management, Citadel Investment Group, and Winton Capital Management.

As you can see these stocks had an average of 11 hedge funds with bullish positions and the average amount invested in these stocks was $38 million. That figure was $38 million in ADTN’s case. Veracyte Inc (NASDAQ:VCYT) is the most popular stock in this table. On the other hand Luther Burbank Corporation (NASDAQ:LBC) is the least popular one with only 6 bullish hedge fund positions. ADTRAN, Inc. (NASDAQ:ADTN) is not the most popular stock in this group but hedge fund interest is still above average. Our calculations showed that top 15 most popular stocks) among hedge funds returned 24.2% through April 22nd and outperformed the S&P 500 ETF (SPY) by more than 7 percentage points. Hedge funds were also right about betting on ADTN as the stock returned 63.4% and outperformed the market by an even larger margin. Hedge funds were rewarded for their relative bullishness.