Our extensive research has shown that imitating the smart money can generate significant returns for retail investors, which is why we track nearly 750 active prominent money managers and analyze their quarterly 13F filings. The stocks that are heavily bought by hedge funds historically outperformed the market, though there is no shortage of high profile failures like hedge funds’ 2018 losses in Facebook and Apple. Let’s take a closer look at what the funds we track think about Adobe Inc. (NASDAQ:ADBE) in this article.

Hedge fund interest in Adobe Inc. (NASDAQ:ADBE) shares was flat at the end of last quarter. This is usually a negative indicator, but not in Adobe’s case. That’s because hedge fund sentiment towards ADBE hit its all-time high at the end of June and this didn’t change during the third quarter either. Our calculations also showed that ADBE ranked 18th overall among the 30 most popular stocks among hedge funds (see the video below).

At the end of the third quarter, a total of 92 of the hedge funds tracked by Insider Monkey were bullish on this stock, a change of 0% from one quarter earlier. The graph below displays the number of hedge funds with bullish position in ADBE over the last 17 quarters. With the smart money’s capital changing hands, there exists a few key hedge fund managers who were adding to their holdings meaningfully (or already accumulated large positions). 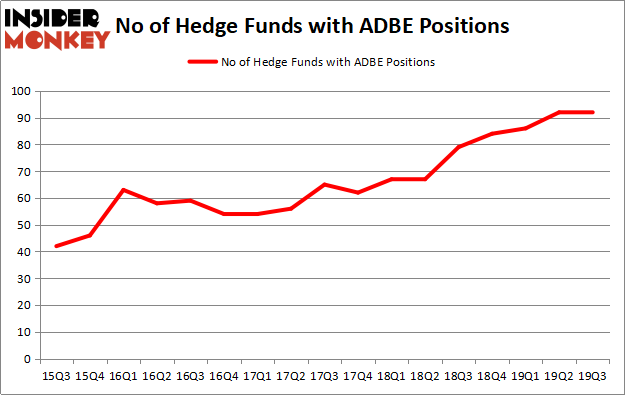 More specifically, Fisher Asset Management was the largest shareholder of Adobe Inc. (NASDAQ:ADBE), with a stake worth $1127 million reported as of the end of September. Trailing Fisher Asset Management was Lone Pine Capital, which amassed a stake valued at $981.7 million. Egerton Capital Limited, Melvin Capital Management, and Coatue Management were also very fond of the stock, becoming one of the largest hedge fund holders of the company. In terms of the portfolio weights assigned to each position Two Creeks Capital Management allocated the biggest weight to Adobe Inc. (NASDAQ:ADBE), around 9.77% of its portfolio. BlueSpruce Investments is also relatively very bullish on the stock, designating 9.7 percent of its 13F equity portfolio to ADBE.

Our database also shows that there were a few hedge funds who sold off their full holdings by the end of the third quarter. Interestingly, Dmitry Balyasny’s Balyasny Asset Management dropped the largest position of the 750 funds monitored by Insider Monkey, totaling an estimated $62.3 million in stock. Brandon Haley’s fund, Holocene Advisors, also said goodbye to its stock, about $39.6 million worth. These bearish behaviors are important to note, as total hedge fund interest stayed the same (this is a bearish signal in our experience).

As you can see these stocks had an average of 57.75 hedge funds with bullish positions and the average amount invested in these stocks was $4121 million. That figure was $8325 million in ADBE’s case. salesforce.com, inc. (NYSE:CRM) is the most popular stock in this table. On the other hand BP plc (NYSE:BP) is the least popular one with only 36 bullish hedge fund positions. Adobe Inc. (NASDAQ:ADBE) is not the most popular stock in this group but hedge fund interest is still above average. Our calculations showed that top 20 most popular stocks among hedge funds returned 34.7% in 2019 through November 22nd and outperformed the S&P 500 ETF (SPY) by 8.5 percentage points. Hedge funds were also right about betting on ADBE as the stock returned 8.3% during the fourth quarter (through 11/22) and outperformed the market. Hedge funds were rewarded for their relative bullishness.