A whopping number of 13F filings filed with U.S. Securities and Exchange Commission has been processed by Insider Monkey so that individual investors can look at the overall hedge fund sentiment towards the stocks included in their watchlists. These freshly-submitted public filings disclose money managers’ equity positions as of the end of the three-month period that ended June 28, so let’s proceed with the discussion of the hedge fund sentiment on Adesto Technologies Corporation (NASDAQ:IOTS).

Is Adesto Technologies Corporation (NASDAQ:IOTS) a good stock to buy now? Prominent investors are becoming more confident. The number of long hedge fund positions inched up by 1 recently. Our calculations also showed that IOTS isn’t among the 30 most popular stocks among hedge funds (see the video below).

In addition to following the biggest hedge funds for investment ideas, we also share stock pitches from conferences, investor letters and other sources  like this one where the fund manager is talking about two under the radar 1000% return potential stocks: first one in internet infrastructure and the second in the heart of advertising market. We use hedge fund buy/sell signals to determine whether to conduct in-depth analysis of these stock ideas which take days. Let’s view the fresh hedge fund action regarding Adesto Technologies Corporation (NASDAQ:IOTS).

At the end of the second quarter, a total of 8 of the hedge funds tracked by Insider Monkey were long this stock, a change of 14% from one quarter earlier. Below, you can check out the change in hedge fund sentiment towards IOTS over the last 16 quarters. With the smart money’s sentiment swirling, there exists a few notable hedge fund managers who were boosting their holdings meaningfully (or already accumulated large positions). 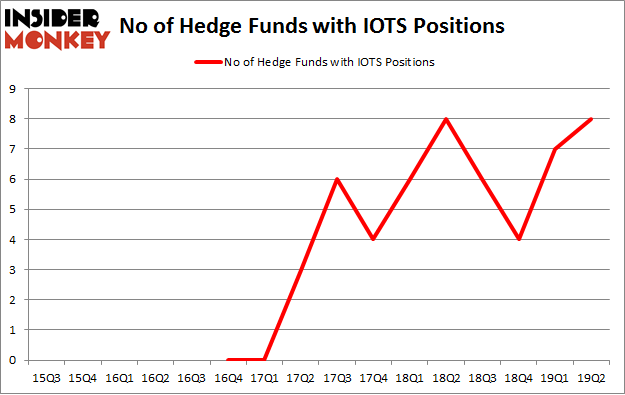 Of the funds tracked by Insider Monkey, Nokomis Capital, managed by Brett Hendrickson, holds the biggest position in Adesto Technologies Corporation (NASDAQ:IOTS). Nokomis Capital has a $23.9 million position in the stock, comprising 4.7% of its 13F portfolio. The second most bullish fund manager is Royce & Associates, managed by Chuck Royce, which holds a $7 million position; 0.1% of its 13F portfolio is allocated to the stock. Some other peers that are bullish include Richard Mashaal’s Rima Senvest Management, Israel Englander’s Millennium Management and D. E. Shaw’s D E Shaw.

Consequently, key money managers have been driving this bullishness. ExodusPoint Capital, managed by Michael Gelband, initiated the most valuable position in Adesto Technologies Corporation (NASDAQ:IOTS). ExodusPoint Capital had $0.2 million invested in the company at the end of the quarter.

As you can see these stocks had an average of 5.25 hedge funds with bullish positions and the average amount invested in these stocks was $16 million. That figure was $40 million in IOTS’s case. Urovant Sciences Ltd. (NASDAQ:UROV) is the most popular stock in this table. On the other hand RGC Resources, Inc. (NASDAQ:RGCO) is the least popular one with only 1 bullish hedge fund positions. Adesto Technologies Corporation (NASDAQ:IOTS) is not the most popular stock in this group but hedge fund interest is still above average. Our calculations showed that top 20 most popular stocks among hedge funds returned 24.4% in 2019 through September 30th and outperformed the S&P 500 ETF (SPY) by 4 percentage points. Hedge funds were also right about betting on IOTS, though not to the same extent, as the stock returned 5% during the third quarter and outperformed the market as well.