Hedge Funds Have Never Been Less Bullish On Mallinckrodt (MNK)

Mallinckrodt Public Limited Company (NYSE:MNK) shares haven’t seen a lot of action during the second quarter. Overall, hedge fund sentiment was unchanged. The stock was in 20 hedge funds’ portfolios at the end of the second quarter of 2019. At the end of this article we will also compare MNK to other stocks including INTL Fcstone Inc (NASDAQ:INTL), Bryn Mawr Bank Corp. (NASDAQ:BMTC), and Johnson Outdoors Inc. (NASDAQ:JOUT) to get a better sense of its popularity. 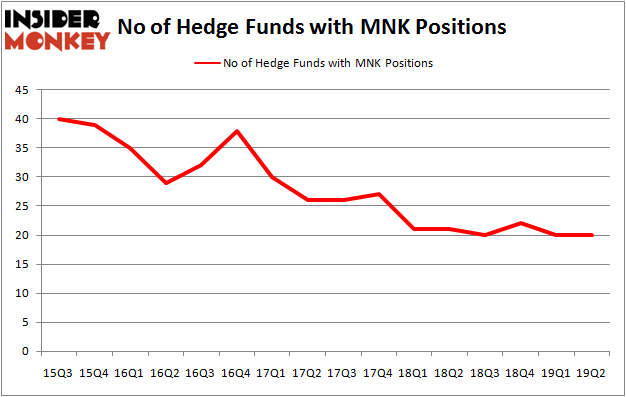 More specifically, Deerfield Management was the largest shareholder of Mallinckrodt Public Limited Company (NYSE:MNK), with a stake worth $38.4 million reported as of the end of March. Trailing Deerfield Management was Miller Value Partners, which amassed a stake valued at $34 million. Armistice Capital, AQR Capital Management, and D E Shaw were also very fond of the stock, giving the stock large weights in their portfolios.

Because Mallinckrodt Public Limited Company (NYSE:MNK) has faced declining sentiment from the aggregate hedge fund industry, it’s easy to see that there were a few funds who sold off their entire stakes heading into Q3. Interestingly, Steven Boyd’s Armistice Capital dumped the largest stake of the 750 funds watched by Insider Monkey, valued at about $32.6 million in stock. Peter Rathjens, Bruce Clarke and John Campbell’s fund, Arrowstreet Capital, also dropped its stock, about $12.4 million worth. These moves are intriguing to say the least, as aggregate hedge fund interest stayed the same (this is a bearish signal in our experience).

As you can see these stocks had an average of 9.75 hedge funds with bullish positions and the average amount invested in these stocks was $74 million. That figure was $153 million in MNK’s case. INTL Fcstone Inc (NASDAQ:INTL) is the most popular stock in this table. On the other hand Bryn Mawr Bank Corp. (NASDAQ:BMTC) is the least popular one with only 9 bullish hedge fund positions. Compared to these stocks Mallinckrodt Public Limited Company (NYSE:MNK) is more popular among hedge funds. Our calculations showed that top 20 most popular stocks among hedge funds returned 24.4% in 2019 through September 30th and outperformed the S&P 500 ETF (SPY) by 4 percentage points. Unfortunately MNK wasn’t nearly as popular as these 20 stocks and hedge funds that were betting on MNK were disappointed as the stock returned -73.7% during the third quarter and underperformed the market. If you are interested in investing in large cap stocks with huge upside potential, you should check out the top 20 most popular stocks among hedge funds as many of these stocks already outperformed the market in Q3.