Hedge funds are known to underperform the bull markets but that’s not because they are terrible at stock picking. Hedge funds underperform because their net exposure in only 40-70% and they charge exorbitant fees. No one knows what the future holds and how market participants will react to the bountiful news that floods in each day. However, hedge funds’ consensus picks on average deliver market beating returns. For example in the first 9 months of this year through September 30th the Standard and Poor’s 500 Index returned approximately 20% (including dividend payments). Conversely, hedge funds’ top 20 large-cap stock picks generated a return of 24% during the same 9-month period, with the majority of these stock picks outperforming the broader market benchmark. Interestingly, an average long/short hedge fund returned only a fraction of this value due to the hedges they implemented and the large fees they charged. If you pay attention to the actual hedge fund returns versus the returns of their long stock picks, you might believe that it is a waste of time to analyze hedge funds’ purchases. We know better. That’s why we scrutinize hedge fund sentiment before we invest in a stock like HD Supply Holdings Inc (NASDAQ:HDS).

HD Supply Holdings Inc (NASDAQ:HDS) shares haven’t seen a lot of action during the second quarter. Overall, hedge fund sentiment was unchanged but still at its all time low. The stock was in 30 hedge funds’ portfolios at the end of June. The level and the change in hedge fund popularity aren’t the only variables you need to analyze to decipher hedge funds’ perspectives. A stock may witness a boost in popularity but it may still be less popular than similarly priced stocks. That’s why at the end of this article we will examine companies such as WABCO Holdings Inc. (NYSE:WBC), Royal Gold, Inc (NASDAQ:RGLD), and Anaplan, Inc. (NYSE:PLAN) to gather more data points. Our calculations also showed that HDS isn’t among the 30 most popular stocks among hedge funds (see the video below).

Heading into the third quarter of 2019, a total of 30 of the hedge funds tracked by Insider Monkey were bullish on this stock, a change of 0% from the first quarter of 2019. Below, you can check out the change in hedge fund sentiment towards HDS over the last 16 quarters. With hedge funds’ sentiment swirling, there exists an “upper tier” of notable hedge fund managers who were upping their holdings meaningfully (or already accumulated large positions). 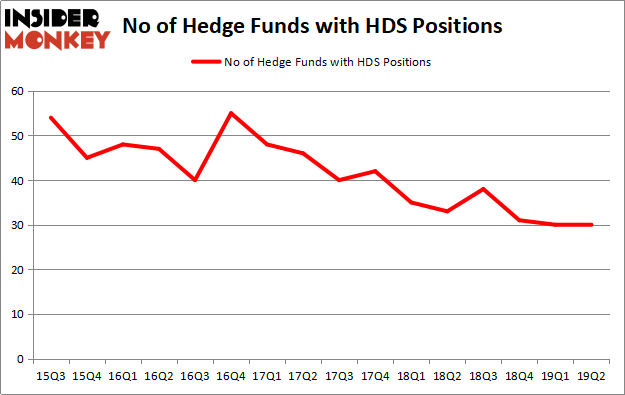 The largest stake in HD Supply Holdings Inc (NASDAQ:HDS) was held by Iridian Asset Management, which reported holding $189.7 million worth of stock at the end of March. It was followed by D E Shaw with a $137.7 million position. Other investors bullish on the company included OZ Management, JANA Partners, and GLG Partners.

Judging by the fact that HD Supply Holdings Inc (NASDAQ:HDS) has experienced declining sentiment from the aggregate hedge fund industry, logic holds that there was a specific group of money managers who were dropping their positions entirely heading into Q3. At the top of the heap, Gabriel Plotkin’s Melvin Capital Management cut the largest investment of all the hedgies followed by Insider Monkey, valued at about $39 million in stock, and David Costen Haley’s HBK Investments was right behind this move, as the fund dropped about $16.9 million worth. These transactions are intriguing to say the least, as aggregate hedge fund interest stayed the same (this is a bearish signal in our experience).

As you can see these stocks had an average of 27.5 hedge funds with bullish positions and the average amount invested in these stocks was $943 million. That figure was $894 million in HDS’s case. Anaplan, Inc. (NYSE:PLAN) is the most popular stock in this table. On the other hand Royal Gold, Inc (NASDAQ:RGLD) is the least popular one with only 19 bullish hedge fund positions. HD Supply Holdings Inc (NASDAQ:HDS) is not the most popular stock in this group but hedge fund interest is still above average. This is a slightly positive signal but we’d rather spend our time researching stocks that hedge funds are piling on. Our calculations showed that top 20 most popular stocks among hedge funds returned 24.4% in 2019 through September 30th and outperformed the S&P 500 ETF (SPY) by 4 percentage points. Unfortunately HDS wasn’t nearly as popular as these 20 stocks and hedge funds that were betting on HDS were disappointed as the stock returned -2.8% during the third quarter and underperformed the market. If you are interested in investing in large cap stocks with huge upside potential, you should check out the top 20 most popular stocks among hedge funds as many of these stocks already outperformed the market so far this year.