As we already know from media reports and hedge fund investor letters, hedge funds delivered their best returns in a decade. Most investors who decided to stick with hedge funds after a rough 2018 recouped their losses by the end of the second quarter. We get to see hedge funds’ thoughts towards the market and individual stocks by aggregating their quarterly portfolio movements and reading their investor letters. In this article, we will particularly take a look at what hedge funds think about American Eagle Outfitters Inc. (NYSE:AEO).

Is American Eagle Outfitters Inc. (NYSE:AEO) a good investment right now? Prominent investors are in a pessimistic mood. The number of long hedge fund positions were trimmed by 4 lately. Our calculations also showed that AEO isn’t among the 30 most popular stocks among hedge funds (see the video below). AEO was in 21 hedge funds’ portfolios at the end of June. There were 25 hedge funds in our database with AEO holdings at the end of the previous quarter.

At the end of the second quarter, a total of 21 of the hedge funds tracked by Insider Monkey held long positions in this stock, a change of -16% from the first quarter of 2019. The graph below displays the number of hedge funds with bullish position in AEO over the last 16 quarters. With hedge funds’ capital changing hands, there exists an “upper tier” of noteworthy hedge fund managers who were upping their stakes considerably (or already accumulated large positions). 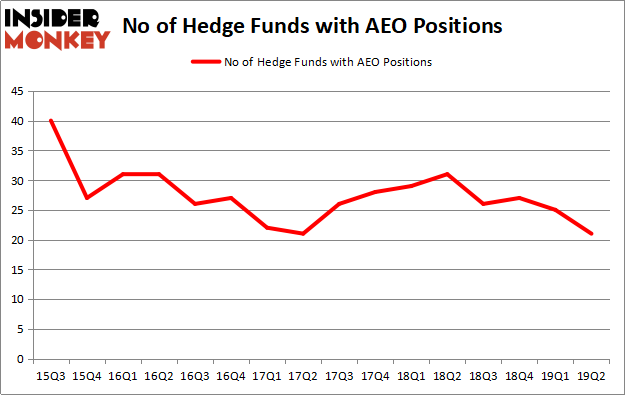 More specifically, Renaissance Technologies was the largest shareholder of American Eagle Outfitters Inc. (NYSE:AEO), with a stake worth $75.4 million reported as of the end of March. Trailing Renaissance Technologies was AQR Capital Management, which amassed a stake valued at $69 million. Arrowstreet Capital, Platinum Asset Management, and Millennium Management were also very fond of the stock, giving the stock large weights in their portfolios.

Because American Eagle Outfitters Inc. (NYSE:AEO) has witnessed falling interest from the aggregate hedge fund industry, it’s safe to say that there was a specific group of hedge funds who sold off their positions entirely last quarter. At the top of the heap, Louis Bacon’s Moore Global Investments cut the largest position of all the hedgies monitored by Insider Monkey, totaling close to $13.9 million in stock. Dmitry Balyasny’s fund, Balyasny Asset Management, also cut its stock, about $13.5 million worth. These transactions are interesting, as aggregate hedge fund interest was cut by 4 funds last quarter.