We at Insider Monkey have gone over 700 13F filings that hedge funds and prominent investors are required to file by the government. The 13F filings show the funds’ and investors’ portfolio positions as of June 30. In this article we look at what those investors think of Cisco Systems, Inc. (NASDAQ:CSCO).

Hedge fund ownership of Cisco Systems, Inc. (NASDAQ:CSCO) continued to trend downward in Q2, falling for the 4th time in the past 5 quarters. Hedge fund ownership has fallen by 23% during that time. Fisher Investments was not among them, buying an additional 2.13 million shares in Q3, with the company landing 14th on the list of Billionaire Ken Fisher’s Top Stock Picks Heading Into 2019. 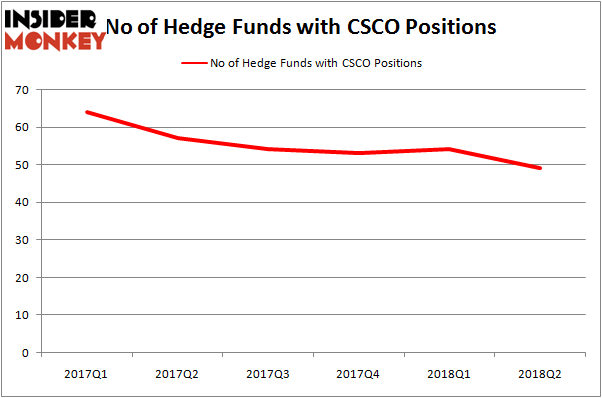 When looking at the institutional investors followed by Insider Monkey, Ken Fisher’s Fisher Asset Management, managed by Ken Fisher, holds the most valuable position in Cisco Systems, Inc. (NASDAQ:CSCO). Fisher Asset Management has a $773.2 million position in the stock, comprising 1% of its 13F portfolio. Sitting at the No. 2 spot is AQR Capital Management, led by Cliff Asness, holding a $475.8 million position; 0.5% of its 13F portfolio is allocated to the company. Other members of the smart money that are bullish consist of Zeke Ashton’s Centaur Capital Partners, Donald Yacktman’s Yacktman Asset Management and Anthony Scaramucciá’s Skybridge Capital.

Because Cisco Systems, Inc. (NASDAQ:CSCO) has experienced declining sentiment from the smart money, it’s easy to see that there was a specific group of hedge funds that elected to cut their positions entirely in the second quarter. Interestingly, Scott Bessent’s Key Square Capital Management dumped the largest investment of the “upper crust” of funds monitored by Insider Monkey, worth close to $61 million in stock, and Benjamin A. Smith’s Laurion Capital Management was right behind this move, as the fund cut about $16.9 million worth. These moves are important to note, as total hedge fund interest fell by 5 funds in the second quarter.

As you can see these stocks had an average of 36 hedge funds with bullish positions and the average amount invested in these stocks was $3.72 billion. That figure was $2.88 billion in CSCO’s case. The Boeing Company (NYSE:BA) is the most popular stock in this table. On the other hand Toyota Motor Corporation (ADR) (NYSE:TM) is the least popular one with only 13 bullish hedge fund positions. Cisco Systems, Inc. (NASDAQ:CSCO) is not the most popular stock in this group but hedge fund interest is still above average, though falling. This is a mixed signal, as hedge funds may feel the stock’s valuation is fair now. We would look for a more appealing target.