Does National Fuel Gas Co. (NYSE:NFG) represent a good buying opportunity at the moment? Let’s briefly check the hedge fund interest towards the company. Hedge fund firms constantly search out bright intellectuals and highly-experienced employees and invest millions of dollars on research activities, so it is no wonder they tend to generate millions in profits each year. It is also true that some hedge fund players fail inconceivably on some occasions, but their stock picks have been generating superior risk-adjusted returns on average over the years.

Hedge fund ownership of National Fuel Gas Co. (NYSE:NFG) surged in Q2 by 42% as multiple leading hedge funds bought into the diversified E&P company. Nonetheless, overall hedge fund ownership remains low as just 2.6% of the funds tracked in our custom database owned shares of the company in the middle of 2018. National Fuel ranked highly on our list of the 25 Best Dividend Stocks for Retirement, having paid out dividends for each of the past 48 years. Its dividend currently yields a solid 3.18% annually.

What does the smart money think about National Fuel Gas Co. (NYSE:NFG)? 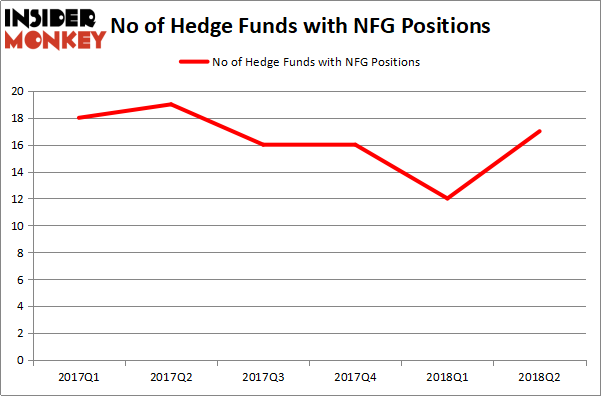 According to Insider Monkey’s hedge fund database, Mario Gabelli’s GAMCO Investors has the number one position in National Fuel Gas Co. (NYSE:NFG), worth close to $142.9 million, accounting for 1% of its total 13F portfolio. On GAMCO Investors’ heels is Jim Simons of Renaissance Technologies, with a $20.6 million position; the fund has less than 0.1% of its 13F portfolio invested in the stock. Some other peers that are bullish comprise Gregg J. Powers’ Private Capital Management, Roger Ibbotson’s Zebra Capital Management and Joe Huber’s Huber Capital Management.

As aggregate interest increased, key money managers were leading the bulls’ herd. GLG Partners, managed by Noam Gottesman, created the biggest position in National Fuel Gas Co. (NYSE:NFG). GLG Partners had $3.6 million invested in the company at the end of the quarter. Andrew Feldstein and Stephen Siderow’s Blue Mountain Capital also made a $0.3 million investment in the stock during the quarter. The other funds with new positions in the stock are Peter Rathjens, Bruce Clarke and John Campbell’s Arrowstreet Capital, Benjamin A. Smith’s Laurion Capital Management, and D E Shaw.

As you can see these stocks had an average of 14 hedge funds with bullish positions and the average amount invested in these stocks was $230 million. That figure was $210 million in NFG’s case. Dun & Bradstreet Corp (NYSE:DNB) is the most popular stock in this table. On the other hand Algonquin Power & Utilities Corp. (NYSE:AQN) is the least popular one with only 6 bullish hedge fund positions. National Fuel Gas Co. (NYSE:NFG) is not the most popular stock in this group but hedge fund interest is still above average. This is a slightly positive signal but we’d rather spend our time researching stocks that hedge funds are piling on. In this regard DNB might be a better candidate to consider a long position.