Hedge Funds Flocked Into Red Hat, Inc. (RHT) Ahead of Its Merger With IBM

With the fourth-quarter round of 13F filings behind us it is time to take a look at the stocks in which some of the best money managers in the world preferred to invest or sell heading into the first quarter. One of these stocks was Red Hat, Inc. (NYSE:RHT).

Red Hat, Inc. (NYSE:RHT) was in 65 hedge funds’ portfolios at the end of the fourth quarter of 2018. RHT has experienced an increase in support from the world’s most elite money managers recently. There were 21 hedge funds in our database with RHT holdings at the end of the previous quarter. Our calculations also showed that RHT isn’t among the 30 most popular stocks among hedge funds. 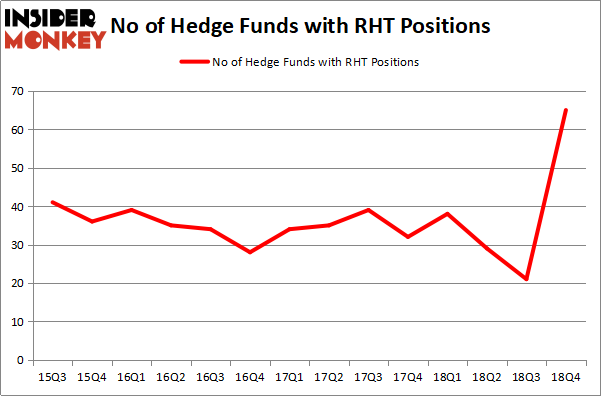 Among these funds, Berkshire Hathaway held the most valuable stake in Red Hat, Inc. (NYSE:RHT), which was worth $733.4 million at the end of the third quarter. On the second spot was Citadel Investment Group which amassed $338 million worth of shares. Moreover, Carlson Capital, Millennium Management, and Pentwater Capital Management were also bullish on Red Hat, Inc. (NYSE:RHT), allocating a large percentage of their portfolios to this stock.

With a general bullishness amongst the heavyweights, some big names were leading the bulls’ herd. Berkshire Hathaway, managed by Warren Buffett, created the most outsized position in Red Hat, Inc. (NYSE:RHT). Berkshire Hathaway had $733.4 million invested in the company at the end of the quarter. Clint Carlson’s Carlson Capital also made a $333.6 million investment in the stock during the quarter. The other funds with brand new RHT positions are Matthew Halbower’s Pentwater Capital Management, Alec Litowitz and Ross Laser’s Magnetar Capital, and Carl Tiedemann and Michael Tiedemann’s TIG Advisors.

As you can see these stocks had an average of 38.75 hedge funds with bullish positions and the average amount invested in these stocks was $2382 million. That figure was $4019 million in RHT’s case. Constellation Brands, Inc. (NYSE:STZ) is the most popular stock in this table. On the other hand NetEase, Inc (NASDAQ:NTES) is the least popular one with only 27 bullish hedge fund positions. Compared to these stocks Red Hat, Inc. (NYSE:RHT) is more popular among hedge funds. Our calculations showed that top 15 most popular stocks among hedge funds returned 19.7% through March 15th and outperformed the S&P 500 ETF (SPY) by 6.6 percentage points. Unfortunately RHT wasn’t in this group. Hedge funds that bet on RHT were content as the stock returned 3.5% and underperformed short-term interest rates. If you are interested in investing in large cap stocks, you should check out the top 15 hedge fund stocks as 13 of these outperformed the market.