The Insider Monkey team has completed processing the quarterly 13F filings for the September quarter submitted by the hedge funds and other money managers included in our extensive database. Most hedge fund investors experienced strong gains on the back of a strong market performance, which certainly propelled them to adjust their equity holdings so as to maintain the desired risk profile. As a result, the relevancy of these public filings and their content is indisputable, as they may reveal numerous high-potential stocks. The following article will discuss the smart money sentiment towards Corelogic Inc (NYSE:CLGX).

Corelogic Inc (NYSE:CLGX) shareholders have witnessed an increase in activity from the world’s largest hedge funds recently. CLGX was in 28 hedge funds’ portfolios at the end of September. There were 23 hedge funds in our database with CLGX holdings at the end of the previous quarter. Our calculations also showed that CLGX isn’t among the 30 most popular stocks among hedge funds (click for Q3 rankings and see the video below for Q2 rankings).

Unlike the largest US hedge funds that are convinced Dow will soar past 40,000 or the world’s most bearish hedge fund that’s more convinced than ever that a crash is coming, our long-short investment strategy doesn’t rely on bull or bear markets to deliver double digit returns. We only rely on the best performing hedge funds‘ buy/sell signals. We’re going to analyze the latest hedge fund action encompassing Corelogic Inc (NYSE:CLGX).

What have hedge funds been doing with Corelogic Inc (NYSE:CLGX)? 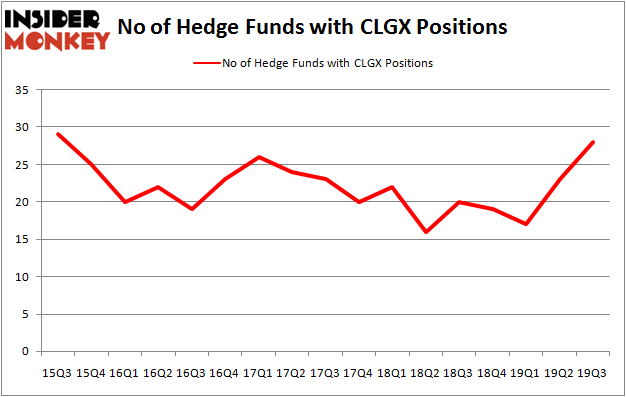 The largest stake in Corelogic Inc (NYSE:CLGX) was held by D E Shaw, which reported holding $117.1 million worth of stock at the end of September. It was followed by Fisher Asset Management with a $87.8 million position. Other investors bullish on the company included Renaissance Technologies, Echo Street Capital Management, and Millennium Management. In terms of the portfolio weights assigned to each position Prana Capital Management allocated the biggest weight to Corelogic Inc (NYSE:CLGX), around 1.33% of its portfolio. AlphaOne Capital Partners is also relatively very bullish on the stock, dishing out 0.73 percent of its 13F equity portfolio to CLGX.

As aggregate interest increased, key money managers have been driving this bullishness. Balyasny Asset Management, managed by Dmitry Balyasny, created the most valuable position in Corelogic Inc (NYSE:CLGX). Balyasny Asset Management had $3.1 million invested in the company at the end of the quarter. Lee Ainslie’s Maverick Capital also made a $0.9 million investment in the stock during the quarter. The other funds with new positions in the stock are Paul Tudor Jones’s Tudor Investment Corp, Paul Marshall and Ian Wace’s Marshall Wace, and David Harding’s Winton Capital Management.

Let’s go over hedge fund activity in other stocks – not necessarily in the same industry as Corelogic Inc (NYSE:CLGX) but similarly valued. We will take a look at Coherent, Inc. (NASDAQ:COHR), Dicks Sporting Goods Inc (NYSE:DKS), Chimera Investment Corporation (NYSE:CIM), and Rayonier Inc. (NYSE:RYN). This group of stocks’ market valuations are similar to CLGX’s market valuation.

As you can see these stocks had an average of 16.75 hedge funds with bullish positions and the average amount invested in these stocks was $287 million. That figure was $371 million in CLGX’s case. Dicks Sporting Goods Inc (NYSE:DKS) is the most popular stock in this table. On the other hand Chimera Investment Corporation (NYSE:CIM) is the least popular one with only 12 bullish hedge fund positions. Compared to these stocks Corelogic Inc (NYSE:CLGX) is more popular among hedge funds. Our calculations showed that top 20 most popular stocks among hedge funds returned 37.4% in 2019 through the end of November and outperformed the S&P 500 ETF (SPY) by 9.9 percentage points. Unfortunately CLGX wasn’t nearly as popular as these 20 stocks and hedge funds that were betting on CLGX were disappointed as the stock returned -10.5% during the first two months of the fourth quarter and underperformed the market. If you are interested in investing in large cap stocks with huge upside potential, you should check out the top 20 most popular stocks among hedge funds as 70 percent of these stocks already outperformed the market in Q4.