Hedge funds and large money managers usually invest with a focus on the long-term horizon and, therefore, short-lived dips on the charts, usually don’t make them change their opinion towards a company. This time it may be different. During the fourth quarter of 2018 we observed increased volatility and small-cap stocks underperformed the market. Hedge fund investor letters indicated that they are cutting their overall exposure, closing out some position and doubling down on others. Let’s take a look at the hedge fund sentiment towards Ball Corporation (NYSE:BLL) to find out whether it was one of their high conviction long-term ideas.

Is Ball Corporation (NYSE:BLL) the right investment to pursue these days? Money managers are becoming hopeful. The number of bullish hedge fund positions advanced by 13 lately. That’s a very large increase for a stock that had only 20 hedge funds with bullish positions at the end of September.

We’re going to take a peek at the new hedge fund action regarding Ball Corporation (NYSE:BLL).

What does the smart money think about Ball Corporation (NYSE:BLL)? 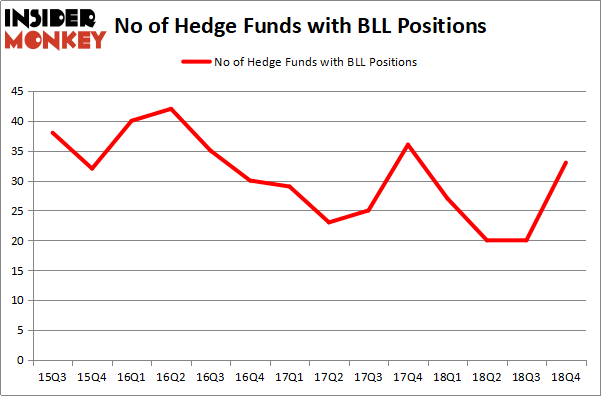 The largest stake in Ball Corporation (NYSE:BLL) was held by Rivulet Capital, which reported holding $156.8 million worth of stock at the end of September. It was followed by Chilton Investment Company with a $146.5 million position. Other investors bullish on the company included Iridian Asset Management, Brookside Capital, and Citadel Investment Group.

As aggregate interest increased, key money managers were leading the bulls’ herd. SAYA Management, managed by Anand More, created the most outsized position in Ball Corporation (NYSE:BLL). SAYA Management had $24 million invested in the company at the end of the quarter. David Costen Haley’s HBK Investments also made a $5.8 million investment in the stock during the quarter. The other funds with new positions in the stock are Andrew Feldstein and Stephen Siderow’s Blue Mountain Capital, Jim Simons’s Renaissance Technologies, and Matthew Hulsizer’s PEAK6 Capital Management.

As you can see these stocks had an average of 25.25 hedge funds with bullish positions and the average amount invested in these stocks was $1137 million. That figure was $628 million in BLL’s case. Liberty Global Plc (NASDAQ:LBTYK) is the most popular stock in this table. On the other hand Avangrid, Inc. (NYSE:AGR) is the least popular one with only 13 bullish hedge fund positions. Compared to these stocks Ball Corporation (NYSE:BLL) is more popular among hedge funds. The large increase in hedge fund sentiment by the end of the fourth quarter lifted BLL above all of its market cap peers. Our calculations showed that top 15 most popular stocks among hedge funds returned 19.7% through March 15th and outperformed the S&P 500 ETF (SPY) by 6.6 percentage points. Hedge funds were also right about betting on BLL as the stock returned 25.3% and outperformed the market as well.