WABCO Holdings Inc. (NYSE:WBC) was in 14 hedge funds’ portfolios at the end of December. WBC investors should be aware of a decrease in hedge fund interest recently. There were 15 hedge funds in our database with WBC positions at the end of the previous quarter. Our calculations also showed that WBC isn’t among the 30 most popular stocks among hedge funds.

Heading into the first quarter of 2019, a total of 14 of the hedge funds tracked by Insider Monkey held long positions in this stock, a change of -7% from the second quarter of 2018. By comparison, 20 hedge funds held shares or bullish call options in WBC a year ago. With hedge funds’ capital changing hands, there exists a few noteworthy hedge fund managers who were adding to their stakes meaningfully (or already accumulated large positions). 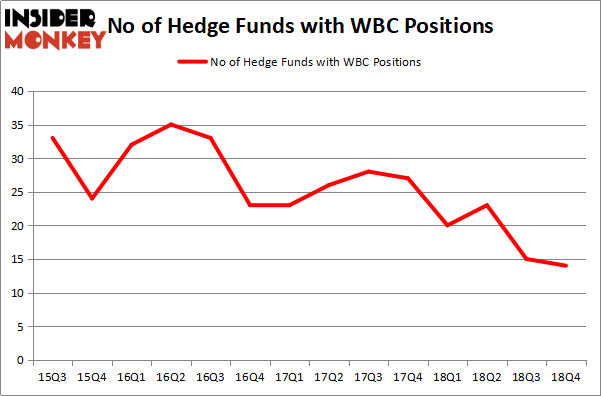 When looking at the institutional investors followed by Insider Monkey, Bob Peck and Andy Raab’s FPR Partners has the biggest position in WABCO Holdings Inc. (NYSE:WBC), worth close to $427.6 million, comprising 11.3% of its total 13F portfolio. Coming in second is Anand Parekh of Alyeska Investment Group, with a $30.9 million position; 0.5% of its 13F portfolio is allocated to the company. Some other hedge funds and institutional investors with similar optimism encompass Richard Scott Greeder’s Broad Bay Capital, Cliff Asness’s AQR Capital Management and Israel Englander’s Millennium Management.

Because WABCO Holdings Inc. (NYSE:WBC) has faced bearish sentiment from the smart money, it’s safe to say that there is a sect of hedgies that slashed their positions entirely last quarter. Intriguingly, Jim Simons’s Renaissance Technologies dumped the biggest investment of all the hedgies watched by Insider Monkey, totaling close to $32.2 million in stock, and Steve Cohen’s Point72 Asset Management was right behind this move, as the fund said goodbye to about $11.4 million worth. These moves are important to note, as aggregate hedge fund interest fell by 1 funds last quarter.

As you can see these stocks had an average of 24.75 hedge funds with bullish positions and the average amount invested in these stocks was $620 million. That figure was $516 million in WBC’s case. Axalta Coating Systems Ltd (NYSE:AXTA) is the most popular stock in this table. On the other hand CyrusOne Inc (NASDAQ:CONE) is the least popular one with only 14 bullish hedge fund positions. Compared to these stocks WABCO Holdings Inc. (NYSE:WBC) is even less popular than CONE. Our calculations showed that top 15 most popular stocks among hedge funds returned 21.3% through April 8th and outperformed the S&P 500 ETF (SPY) by more than 5 percentage points. A few hedge funds were also right about betting on WBC as the stock returned 22.6% and outperformed the market as well. You can see the entire list of these shrewd hedge funds here.