Stryker Corporation (NYSE:SYK) investors should pay attention to a decrease in activity from the world’s largest hedge funds of late. Our calculations also showed that SYK isn’t among the 30 most popular stocks among hedge funds (watch the video below). 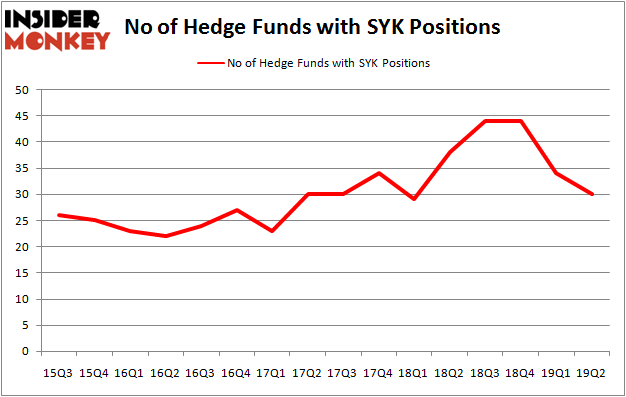 Unlike some fund managers who are betting on Dow reaching 40000 in a year, our long-short investment strategy doesn’t rely on bull markets to deliver double digit returns. We only rely on hedge fund buy/sell signals. We’re going to check out the key hedge fund action encompassing Stryker Corporation (NYSE:SYK).

What have hedge funds been doing with Stryker Corporation (NYSE:SYK)?

Heading into the third quarter of 2019, a total of 30 of the hedge funds tracked by Insider Monkey held long positions in this stock, a change of -12% from one quarter earlier. On the other hand, there were a total of 38 hedge funds with a bullish position in SYK a year ago. With hedge funds’ sentiment swirling, there exists a select group of key hedge fund managers who were adding to their stakes substantially (or already accumulated large positions).

Since Stryker Corporation (NYSE:SYK) has experienced bearish sentiment from the smart money, it’s easy to see that there exists a select few hedge funds that slashed their positions entirely last quarter. Interestingly, Israel Englander’s Millennium Management said goodbye to the largest position of the 750 funds watched by Insider Monkey, totaling about $107.2 million in stock, and Doug Gordon, Jon Hilsabeck and Don Jabro’s Shellback Capital was right behind this move, as the fund said goodbye to about $10.8 million worth. These transactions are important to note, as total hedge fund interest fell by 4 funds last quarter.

As you can see these stocks had an average of 51 hedge funds with bullish positions and the average amount invested in these stocks was $4639 million. That figure was $490 million in SYK’s case. Bristol Myers Squibb Company (NYSE:BMY) is the most popular stock in this table. On the other hand Banco Santander, S.A. (NYSE:SAN) is the least popular one with only 22 bullish hedge fund positions. Stryker Corporation (NYSE:SYK) is not the least popular stock in this group but hedge fund interest is still below average. Our calculations showed that top 20 most popular stocks among hedge funds returned 24.4% in 2019 through September 30th and outperformed the S&P 500 ETF (SPY) by 4 percentage points. A small number of hedge funds were also right about betting on SYK, though not to the same extent, as the stock returned 5.5% during the third quarter and outperformed the market.