Is Roper Industries, Inc. (NYSE:ROP) worth your attention right now? Hedge funds are becoming less hopeful. The number of long hedge fund bets were trimmed by 3 recently. Our calculations also showed that ROP isn’t among the 30 most popular stocks among hedge funds. ROP was in 29 hedge funds’ portfolios at the end of the fourth quarter of 2018. There were 32 hedge funds in our database with ROP positions at the end of the previous quarter.

What have hedge funds been doing with Roper Industries, Inc. (NYSE:ROP)?

Heading into the first quarter of 2019, a total of 29 of the hedge funds tracked by Insider Monkey were bullish on this stock, a change of -9% from one quarter earlier. By comparison, 21 hedge funds held shares or bullish call options in ROP a year ago. With hedgies’ positions undergoing their usual ebb and flow, there exists a few noteworthy hedge fund managers who were increasing their stakes considerably (or already accumulated large positions). 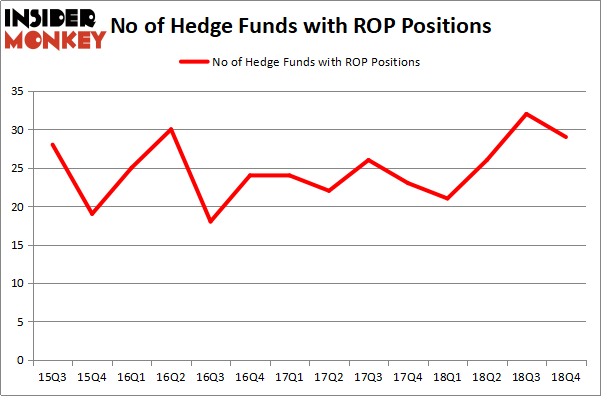 The largest stake in Roper Industries, Inc. (NYSE:ROP) was held by Akre Capital Management, which reported holding $417.7 million worth of stock at the end of September. It was followed by Waratah Capital Advisors with a $54.1 million position. Other investors bullish on the company included Citadel Investment Group, Renaissance Technologies, and Winton Capital Management.

Judging by the fact that Roper Industries, Inc. (NYSE:ROP) has experienced falling interest from hedge fund managers, it’s easy to see that there is a sect of funds that slashed their entire stakes in the third quarter. Intriguingly, Alexander Mitchell’s Scopus Asset Management sold off the largest stake of the 700 funds monitored by Insider Monkey, totaling close to $27.7 million in stock. Malcolm Fairbairn’s fund, Ascend Capital, also cut its stock, about $25.1 million worth. These moves are important to note, as aggregate hedge fund interest dropped by 3 funds in the third quarter.

As you can see these stocks had an average of 29.25 hedge funds with bullish positions and the average amount invested in these stocks was $1155 million. That figure was $647 million in ROP’s case. eBay Inc (NASDAQ:EBAY) is the most popular stock in this table. On the other hand TD Ameritrade Holding Corp. (NASDAQ:AMTD) is the least popular one with only 17 bullish hedge fund positions. Roper Industries, Inc. (NYSE:ROP) is not the least popular stock in this group but hedge fund interest is still below average (though it is close to its all time high). Our calculations showed that top 15 most popular stocks among hedge funds returned 19.7% through March 15th and outperformed the S&P 500 ETF (SPY) by 6.6 percentage points. Hedge funds were also right about betting on ROP as the stock returned 22.6% and outperformed the market as well.