Is PACCAR Inc (NASDAQ:PCAR) a good stock to buy right now? We at Insider Monkey like to examine what billionaires and hedge funds think of a company before doing days of research on it. Given their 2 and 20 payment structure, hedge funds have more incentives and resources than the average investor. The funds have access to expert networks and get tips from industry insiders. They also have numerous Ivy League graduates and MBAs. Like everyone else, hedge funds perform miserably at times, but their consensus picks have historically outperformed the market after risk adjustments.

Is PACCAR Inc (NASDAQ:PCAR) a buy right now? The smart money is in a bearish mood. The number of bullish hedge fund positions shrunk by 1 recently and currently sits at its all time low. Our calculations also showed that PCAR isn’t among the 30 most popular stocks among hedge funds.

To most traders, hedge funds are assumed to be unimportant, outdated investment tools of the past. While there are greater than 8000 funds trading today, Our researchers hone in on the elite of this group, about 750 funds. These investment experts oversee most of the hedge fund industry’s total asset base, and by paying attention to their finest investments, Insider Monkey has brought to light numerous investment strategies that have historically outrun the market. Insider Monkey’s flagship hedge fund strategy surpassed the S&P 500 index by nearly 5 percentage points a year since its inception in May 2014 through early November 2018. We were able to generate large returns even by identifying short candidates. Our portfolio of short stocks lost 27.5% since February 2017 (through March 12th) even though the market was up nearly 25% during the same period. We just shared a list of 6 short targets in our latest quarterly update and they are already down an average of 6% in less than a month.

What have hedge funds been doing with PACCAR Inc (NASDAQ:PCAR)?

At Q4’s end, a total of 19 of the hedge funds tracked by Insider Monkey were bullish on this stock, a change of -5% from the previous quarter. The graph below displays the number of hedge funds with bullish position in PCAR over the last 14 quarters. With hedgies’ positions undergoing their usual ebb and flow, there exists a select group of key hedge fund managers who were boosting their holdings substantially (or already accumulated large positions). 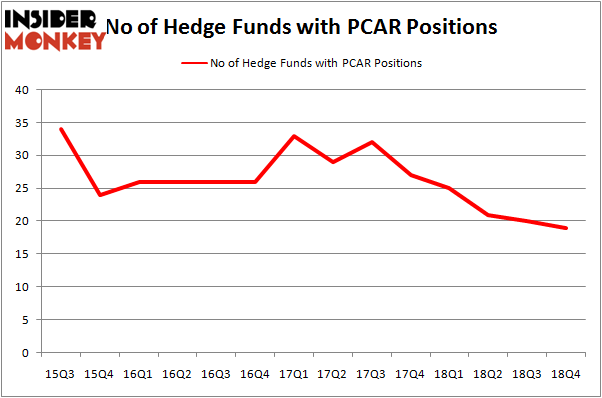 More specifically, Citadel Investment Group was the largest shareholder of PACCAR Inc (NASDAQ:PCAR), with a stake worth $30.2 million reported as of the end of September. Trailing Citadel Investment Group was Anchor Bolt Capital, which amassed a stake valued at $27.6 million. GAMCO Investors, Millennium Management, and Two Sigma Advisors were also very fond of the stock, giving the stock large weights in their portfolios.

Judging by the fact that PACCAR Inc (NASDAQ:PCAR) has witnessed falling interest from the smart money, logic holds that there is a sect of hedgies that decided to sell off their full holdings in the third quarter. At the top of the heap, David Keidan’s Buckingham Capital Management cut the largest stake of all the hedgies monitored by Insider Monkey, totaling an estimated $8 million in stock. Jeffrey Talpins’s fund, Element Capital Management, also said goodbye to its stock, about $7.4 million worth. These bearish behaviors are important to note, as aggregate hedge fund interest was cut by 1 funds in the third quarter.

As you can see these stocks had an average of 18.75 hedge funds with bullish positions and the average amount invested in these stocks was $306 million. That figure was $154 million in PCAR’s case. Discover Financial Services (NYSE:DFS) is the most popular stock in this table. On the other hand Fresenius Medical Care AG & Co. KGaA (NYSE:FMS) is the least popular one with only 8 bullish hedge fund positions. PACCAR Inc (NASDAQ:PCAR) is not the most popular stock in this group but hedge fund interest is still above average. Our calculations showed that top 15 most popular stocks among hedge funds returned 19.7% through March 15th and outperformed the S&P 500 ETF (SPY) by 6.6 percentage points. Hedge funds were also right about betting on PCAR, though not to the same extent, as the stock returned 19% and outperformed the market as well.

Is TransCanada Corporation (TRP) A Good Stock To Buy According To Hedge Funds...
Monthly Newsletter Strategy
Download a free copy of our newsletter and see the details inside!
Hedge Fund Resource Center
Related News
Is PACCAR Inc (PCAR) Going to Burn These Hedge Funds? Top 10 Truck Manufacturing Companies in the World How PACCAR Inc (PCAR) Stacks Up Against Its Peers Why EverBank, Celgene, Centene, PACCAR, and Wolverine World Wide Are Trending Today Are Hedge Funds Losing Interest in Big Auto-Makers? Five Best Auto Manufacturing Stocks To Buy This Year JPMorgan’s Top Dividend Stocks for 2016, Part 4 Hedge Funds Have Never Been This Bullish On Visa Inc (V) Ten of the Most Common Addictions 13 African Countries with the Largest White Population in 2018
Billionaire Hedge Funds