Is Johnson Controls International plc (NYSE:JCI) a worthy investment now? The best stock pickers are getting more optimistic. The number of bullish hedge fund bets went up by 10 recently. Our calculations also showed that JCI isn’t among the 30 most popular stocks among hedge funds.

What have hedge funds been doing with Johnson Controls International plc (NYSE:JCI)?

At the end of the fourth quarter, a total of 26 of the hedge funds tracked by Insider Monkey were long this stock, a change of 63% from the second quarter of 2018. The graph below displays the number of hedge funds with bullish position in JCI over the last 14 quarters. With hedgies’ sentiment swirling, there exists an “upper tier” of key hedge fund managers who were increasing their stakes significantly (or already accumulated large positions). 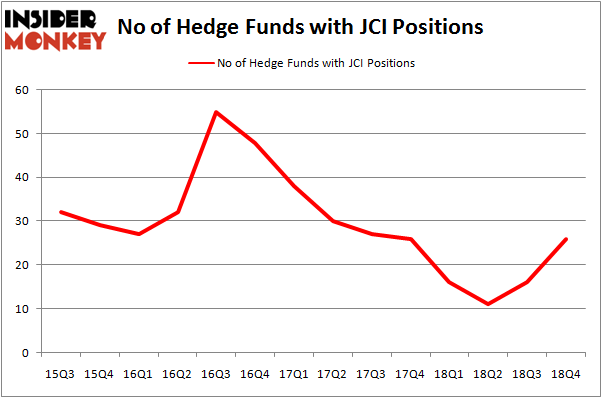 The largest stake in Johnson Controls International plc (NYSE:JCI) was held by Scopia Capital, which reported holding $238.2 million worth of stock at the end of September. It was followed by Diamond Hill Capital with a $122.3 million position. Other investors bullish on the company included GAMCO Investors, D E Shaw, and Millennium Management.

As you can see these stocks had an average of 36.25 hedge funds with bullish positions and the average amount invested in these stocks was $2543 million. That figure was $644 million in JCI’s case. eBay Inc (NASDAQ:EBAY) is the most popular stock in this table. On the other hand Monster Beverage Corp (NASDAQ:MNST) is the least popular one with only 32 bullish hedge fund positions. Compared to these stocks Johnson Controls International plc (NYSE:JCI) is even less popular than MNST. Most hedge funds clearly missed out on JCI even though some hedge funds made timely bets on the stock during Q4. Our calculations showed that top 15 most popular stocks among hedge funds returned 19.7% through March 15th and outperformed the S&P 500 ETF (SPY) by 6.6 percentage points. A few hedge funds were also right about betting on JCI as the stock returned 21.7% and outperformed the market as well.