First Republic Bank (NYSE:FRC) was in 15 hedge funds’ portfolios at the end of the fourth quarter of 2018. FRC shareholders have witnessed a decrease in activity from the world’s largest hedge funds in recent months. There were 23 hedge funds in our database with FRC positions at the end of the previous quarter. Our calculations also showed that FRC isn’t among the 30 most popular stocks among hedge funds. Hedge fund sentiment towards the stock is at its lowest level since 2015.

In the 21st century investor’s toolkit there are a multitude of indicators shareholders put to use to assess their holdings. A pair of the best indicators are hedge fund and insider trading sentiment. Our experts have shown that, historically, those who follow the top picks of the top fund managers can outclass the broader indices by a very impressive margin (see the details here).

At the end of the fourth quarter, a total of 15 of the hedge funds tracked by Insider Monkey were bullish on this stock, a change of -35% from one quarter earlier. The graph below displays the number of hedge funds with bullish position in FRC over the last 14 quarters. With hedge funds’ sentiment swirling, there exists an “upper tier” of noteworthy hedge fund managers who were upping their stakes considerably (or already accumulated large positions). 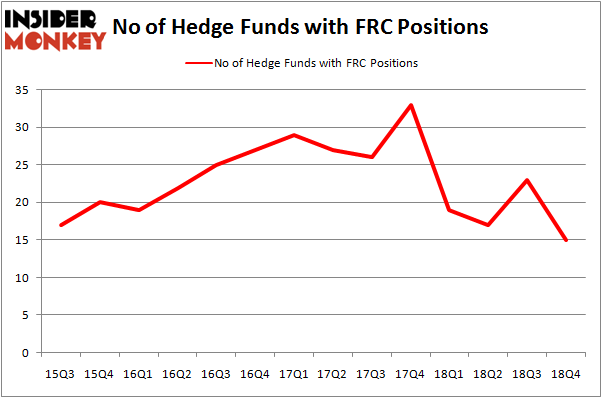 Due to the fact that First Republic Bank (NYSE:FRC) has witnessed declining sentiment from the entirety of the hedge funds we track, logic holds that there is a sect of funds who sold off their full holdings by the end of the third quarter. Interestingly, Ben Levine, Andrew Manuel and Stefan Renold’s LMR Partners said goodbye to the largest investment of all the hedgies followed by Insider Monkey, totaling an estimated $39.1 million in stock, and Benjamin A. Smith’s Laurion Capital Management was right behind this move, as the fund cut about $23.5 million worth. These moves are interesting, as total hedge fund interest fell by 8 funds by the end of the third quarter.

As you can see these stocks had an average of 24.25 hedge funds with bullish positions and the average amount invested in these stocks was $501 million. That figure was $600 million in FRC’s case. Waters Corporation (NYSE:WAT) is the most popular stock in this table. On the other hand International Flavors & Fragrances Inc (NYSE:IFF) is the least popular one with only 21 bullish hedge fund positions. Compared to these stocks First Republic Bank (NYSE:FRC) is even less popular than IFF. Hedge funds clearly dropped the ball on FRC as the stock performed well in 2019. Our calculations showed that top 15 most popular stocks among hedge funds returned 19.7% through March 15th and outperformed the S&P 500 ETF (SPY) by 6.6 percentage points. Only a few hedge funds were also right about betting on FRC, though not to the same extent, as the stock returned 13.9% and outperformed the market as well. You can see the entire list of these shrewd hedge funds here.