A whopping number of 13F filings filed with U.S. Securities and Exchange Commission has been processed by Insider Monkey so that individual investors can look at the overall hedge fund sentiment towards the stocks included in their watchlists. These freshly-submitted public filings disclose money managers’ equity positions as of the end of the three-month period that ended December 31, so let’s proceed with the discussion of the hedge fund sentiment on Danaher Corporation (NYSE:DHR).

Danaher Corporation (NYSE:DHR) has experienced a decrease in hedge fund interest lately. Our calculations also showed that DHR isn’t among the 30 most popular stocks among hedge funds.

To the average investor there are a lot of tools investors put to use to evaluate stocks. A pair of the most useful tools are hedge fund and insider trading activity. Our researchers have shown that, historically, those who follow the top picks of the best hedge fund managers can outclass their index-focused peers by a very impressive amount (see the details here).

Heading into the first quarter of 2019, a total of 48 of the hedge funds tracked by Insider Monkey were bullish on this stock, a change of -6% from the second quarter of 2018. On the other hand, there were a total of 43 hedge funds with a bullish position in DHR a year ago. With hedgies’ capital changing hands, there exists a few noteworthy hedge fund managers who were increasing their stakes substantially (or already accumulated large positions). 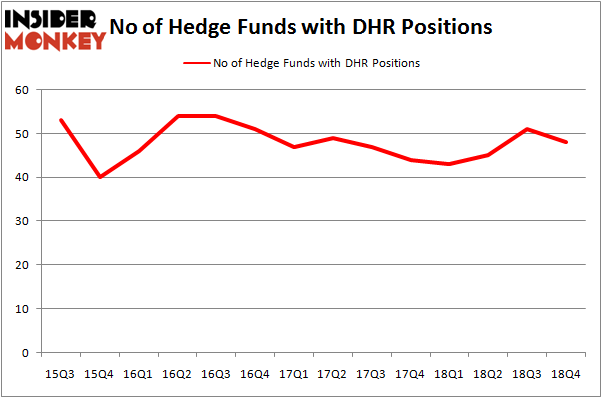 The largest stake in Danaher Corporation (NYSE:DHR) was held by Third Point, which reported holding $320.7 million worth of stock at the end of September. It was followed by AQR Capital Management with a $262.2 million position. Other investors bullish on the company included Impax Asset Management, Akre Capital Management, and Eminence Capital.

Due to the fact that Danaher Corporation (NYSE:DHR) has experienced a decline in interest from hedge fund managers, we can see that there is a sect of money managers who sold off their full holdings heading into Q3. At the top of the heap, Jim Simons’s Renaissance Technologies said goodbye to the biggest investment of all the hedgies followed by Insider Monkey, comprising an estimated $349.8 million in stock. Peter Rathjens, Bruce Clarke and John Campbell’s fund, Arrowstreet Capital, also dumped its stock, about $49.6 million worth. These moves are interesting, as aggregate hedge fund interest fell by 3 funds heading into Q3.

As you can see these stocks had an average of 41 hedge funds with bullish positions and the average amount invested in these stocks was $1796 million. That figure was $2128 million in DHR’s case. ConocoPhillips (NYSE:COP) is the most popular stock in this table. On the other hand Equinor ASA (NYSE:EQNR) is the least popular one with only 13 bullish hedge fund positions. Danaher Corporation (NYSE:DHR) is not the most popular stock in this group but hedge fund interest is still above average. It seems like some hedge funds dropped the ball on DHR by selling the stock at the wrong time. Our calculations showed that top 15 most popular stocks among hedge funds returned 19.7% through March 15th and outperformed the S&P 500 ETF (SPY) by 6.6 percentage points. Other hedge funds were also right about betting on DHR as the stock returned 24.8% and outperformed the market as well.