China Southern Airlines Co Ltd (NYSE:ZNH) was in 4 hedge funds’ portfolios at the end of the fourth quarter of 2018. ZNH shareholders have witnessed a decrease in hedge fund sentiment of late. There were 5 hedge funds in our database with ZNH holdings at the end of the previous quarter. Our calculations also showed that ZNH isn’t among the 30 most popular stocks among hedge funds.

What does the smart money think about China Southern Airlines Co Ltd (NYSE:ZNH)? 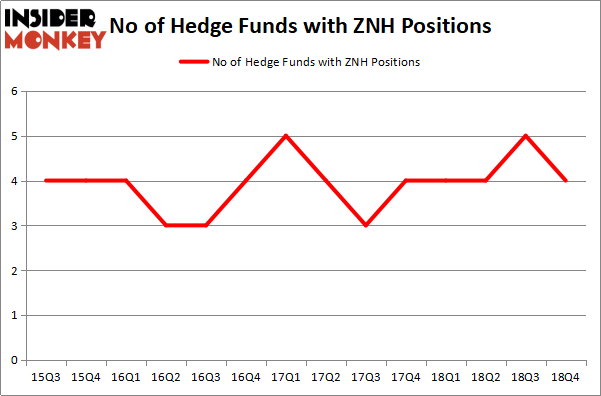 The largest stake in China Southern Airlines Co Ltd (NYSE:ZNH) was held by Renaissance Technologies, which reported holding $12.9 million worth of stock at the end of September. It was followed by Marshall Wace LLP with a $0.8 million position. Other investors bullish on the company included Two Sigma Advisors and Millennium Management.

Seeing as China Southern Airlines Co Ltd (NYSE:ZNH) has experienced bearish sentiment from the entirety of the hedge funds we track, it’s easy to see that there lies a certain “tier” of money managers that decided to sell off their positions entirely last quarter. At the top of the heap, Peter Rathjens, Bruce Clarke and John Campbell’s Arrowstreet Capital cut the biggest stake of the 700 funds followed by Insider Monkey, totaling an estimated $0.9 million in stock. Ken Griffin’s fund, Citadel Investment Group, also cut its stock, about $0.3 million worth. These moves are important to note, as aggregate hedge fund interest dropped by 1 funds last quarter.

As you can see these stocks had an average of 21.5 hedge funds with bullish positions and the average amount invested in these stocks was $743 million. That figure was $14 million in ZNH’s case. Tripadvisor Inc (NASDAQ:TRIP) is the most popular stock in this table. On the other hand TIM Participacoes SA (NYSE:TSU) is the least popular one with only 14 bullish hedge fund positions. Compared to these stocks China Southern Airlines Co Ltd (NYSE:ZNH) is even less popular than TSU. Hedge funds clearly missed out on a great investment opportunity. Our calculations showed that top 15 most popular stocks among hedge funds returned 21.3% through April 8th and outperformed the S&P 500 ETF (SPY) by more than 5 percentage points. Only four hedge funds were also right about betting on ZNH as the stock returned 61.9% and outperformed the market as well. You can see the entire list of these shrewd hedge funds here.