Before we spend days researching a stock idea we’d like to take a look at how hedge funds and billionaire investors recently traded that stock. S&P 500 Index ETF (SPY) lost 13.5% in the fourth quarter. Seven out of 11 industry groups in the S&P 500 Index were down more than 20% from their 52-week highs at the trough of the stock market crash. The average return of a randomly picked stock in the index was even worse. This means you (or a monkey throwing a dart) have less than an even chance of beating the market by randomly picking a stock. On the other hand, the top 15 most popular S&P 500 stocks among hedge funds not only recouped their Q4 losses but also outperformed the index by more than 3 percentage points. In this article, we will take a look at what hedge funds think about CDW Corporation (NASDAQ:CDW).

CDW Corporation (NASDAQ:CDW) shareholders have witnessed a decrease in support from the world’s most elite money managers in recent months. Our calculations also showed that CDW isn’t among the 30 most popular stocks among hedge funds.

What have hedge funds been doing with CDW Corporation (NASDAQ:CDW)?

At the end of the fourth quarter, a total of 26 of the hedge funds tracked by Insider Monkey were bullish on this stock, a change of -7% from one quarter earlier. On the other hand, there were a total of 23 hedge funds with a bullish position in CDW a year ago. With hedge funds’ positions undergoing their usual ebb and flow, there exists an “upper tier” of notable hedge fund managers who were upping their holdings considerably (or already accumulated large positions). 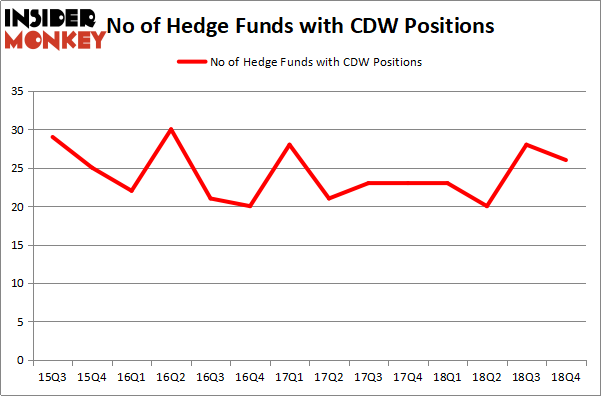 Of the funds tracked by Insider Monkey, Robert Joseph Caruso’s Select Equity Group has the most valuable position in CDW Corporation (NASDAQ:CDW), worth close to $333.2 million, comprising 2.5% of its total 13F portfolio. The second largest stake is held by AQR Capital Management, led by Cliff Asness, holding a $167.3 million position; 0.2% of its 13F portfolio is allocated to the company. Some other members of the smart money that hold long positions encompass Thomas Bancroft’s Makaira Partners, Israel Englander’s Millennium Management and Noam Gottesman’s GLG Partners.

Since CDW Corporation (NASDAQ:CDW) has faced falling interest from the aggregate hedge fund industry, it’s safe to say that there were a few money managers who were dropping their positions entirely last quarter. At the top of the heap, George Zweig, Shane Haas and Ravi Chander’s Signition LP sold off the biggest stake of the 700 funds watched by Insider Monkey, worth close to $1.4 million in stock, and Michael Platt and William Reeves’s BlueCrest Capital Mgmt. was right behind this move, as the fund cut about $0.5 million worth. These moves are important to note, as total hedge fund interest was cut by 2 funds last quarter.

As you can see these stocks had an average of 37.75 hedge funds with bullish positions and the average amount invested in these stocks was $1505 million. That figure was $861 million in CDW’s case. The Liberty SiriusXM Group (NASDAQ:LSXMK) is the most popular stock in this table. On the other hand Symantec Corporation (NASDAQ:SYMC) is the least popular one with only 33 bullish hedge fund positions. Compared to these stocks CDW Corporation (NASDAQ:CDW) is even less popular than SYMC. Hedge funds clearly dropped the ball on CDW. Our calculations showed that top 15 most popular stocks among hedge funds returned 19.7% through March 15th and outperformed the S&P 500 ETF (SPY) by 6.6 percentage points. Only a few hedge funds were also right about betting on CDW as the stock returned 21.1% and outperformed the market as well. You can see the entire list of these shrewd hedge funds here.