Is J.B. Hunt Transport Services, Inc. (NASDAQ:JBHT) worth your attention right now? Investors who are in the know are taking a pessimistic view. The number of long hedge fund bets were trimmed by 7 lately. Our calculations also showed that JBHT isn’t among the 30 most popular stocks among hedge funds (view the video below). JBHT was in 20 hedge funds’ portfolios at the end of June. There were 27 hedge funds in our database with JBHT holdings at the end of the previous quarter. 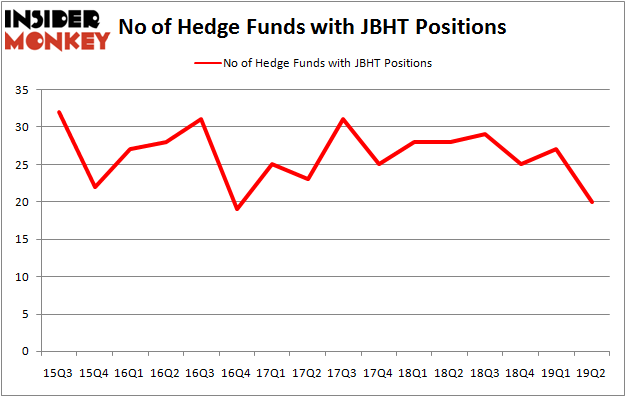 At the end of the second quarter, a total of 20 of the hedge funds tracked by Insider Monkey were bullish on this stock, a change of -26% from the first quarter of 2019. On the other hand, there were a total of 28 hedge funds with a bullish position in JBHT a year ago. With hedgies’ positions undergoing their usual ebb and flow, there exists a few key hedge fund managers who were adding to their holdings considerably (or already accumulated large positions).

More specifically, Two Sigma Advisors was the largest shareholder of J.B. Hunt Transport Services, Inc. (NASDAQ:JBHT), with a stake worth $63.1 million reported as of the end of March. Trailing Two Sigma Advisors was Park Presidio Capital, which amassed a stake valued at $50.3 million. Echo Street Capital Management, D E Shaw, and Renaissance Technologies were also very fond of the stock, giving the stock large weights in their portfolios.

Seeing as J.B. Hunt Transport Services, Inc. (NASDAQ:JBHT) has witnessed a decline in interest from hedge fund managers, it’s safe to say that there is a sect of funds that slashed their positions entirely by the end of the second quarter. Interestingly, Doug Gordon, Jon Hilsabeck and Don Jabro’s Shellback Capital sold off the largest investment of the 750 funds followed by Insider Monkey, totaling close to $6.6 million in stock, and Cristan Blackman’s Empirical Capital Partners was right behind this move, as the fund said goodbye to about $6.1 million worth. These transactions are intriguing to say the least, as aggregate hedge fund interest fell by 7 funds by the end of the second quarter.

As you can see these stocks had an average of 32 hedge funds with bullish positions and the average amount invested in these stocks was $744 million. That figure was $230 million in JBHT’s case. Carvana Co. (NYSE:CVNA) is the most popular stock in this table. On the other hand Invesco Ltd. (NYSE:IVZ) is the least popular one with only 20 bullish hedge fund positions. Compared to these stocks J.B. Hunt Transport Services, Inc. (NASDAQ:JBHT) is even less popular than IVZ. Hedge funds clearly dropped the ball on JBHT as the stock delivered strong returns, though hedge funds’ consensus picks still generated respectable returns. Our calculations showed that top 20 most popular stocks among hedge funds returned 24.4% in 2019 through September 30th and outperformed the S&P 500 ETF (SPY) by 4 percentage points. A small number of hedge funds were also right about betting on JBHT as the stock returned 21.4% during the third quarter and outperformed the market by an even larger margin.