Before we spend days researching a stock idea we like to take a look at how hedge funds and billionaire investors recently traded that stock. S&P 500 Index ETF (SPY) lost 8.7% through October 26. 40% of the S&P 500 constituents are down more than 10%. The average return of a randomly picked stock in the index is -9.5%. This means you (or a monkey throwing a dart) have less than an even chance of beating the market by randomly picking a stock. On the other hand, the top 25 most popular S&P 500 stocks among hedge funds had an average loss of 8.8%. In this article, we will take a look at what hedge funds think about Mercury General Corporation (NYSE:MCY).

A lot of former Mercury General Corporation (NYSE:MCY) bulls sold out of the stock during Q2, as hedge fund ownership of the stock fell by 36%. Just 9 of the hedge funds tracked by Insider Monkey were long Mercury General on June 30, including Jim Simons’ Renaissance Technologies (980,900 shares). The insurance company has been paying dividends for 32 straight years, which landed it in the top 20 on our list of the 25 Best Dividend Stocks for Retirement. 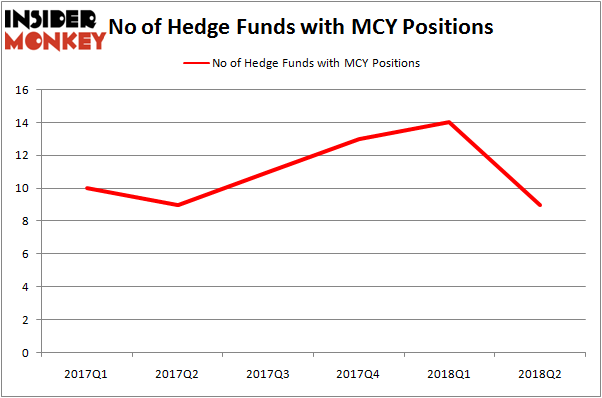 The largest stake in Mercury General Corporation (NYSE:MCY) was held by Renaissance Technologies, which reported holding $44.7 million worth of stock as of the end of June. It was followed by Prospector Partners with an $8.9 million position. Other investors bullish on the company included Capital Returns Management, Royce & Associates, and Two Sigma Advisors.

Due to the fact that Mercury General Corporation (NYSE:MCY) has witnessed bearish sentiment from hedge fund managers, it’s safe to say that there were a few hedgies that slashed their full holdings in the second quarter. At the top of the heap, Michael Platt and William Reeves’ BlueCrest Capital Mgmt. said goodbye to the largest investment of the “upper crust” of funds monitored by Insider Monkey, totaling about $4.7 million in stock, and Peter Rathjens, Bruce Clarke and John Campbell’s Arrowstreet Capital was right behind this move, as the fund dropped about $0.8 million worth. These moves are important to note, as total hedge fund interest fell by 5 funds in the second quarter.

As you can see these stocks had an average of 16 hedge funds with bullish positions and the average amount invested in these stocks was $310 million. That figure was $81.23 million in MCY’s case. KBR, Inc. (NYSE:KBR) is the most popular stock in this table. On the other hand EBS is the least popular one with only 12 bullish hedge fund positions. Compared to these stocks is even less popular than Mercury General Corporation (NYSE:MCY). Considering that hedge funds aren’t fond of this stock in relation to other companies analyzed in this article, it may be a good idea to analyze it in detail and understand why the smart money doesn’t see any hidden value.