Is Ironwood Pharmaceuticals, Inc. (NASDAQ:IRWD) a buy right now? Investors who are in the know are getting less optimistic. The number of long hedge fund bets shrunk by 2 recently. Our calculations also showed that IRWD isn’t among the 30 most popular stocks among hedge funds (see the video below). IRWD was in 21 hedge funds’ portfolios at the end of the second quarter of 2019. There were 23 hedge funds in our database with IRWD positions at the end of the previous quarter.

According to most investors, hedge funds are seen as underperforming, old investment vehicles of the past. While there are greater than 8000 funds in operation today, Our researchers hone in on the elite of this club, approximately 750 funds. These investment experts manage most of the smart money’s total asset base, and by shadowing their inimitable equity investments, Insider Monkey has uncovered numerous investment strategies that have historically outrun Mr. Market. Insider Monkey’s flagship hedge fund strategy outstripped the S&P 500 index by around 5 percentage points a year since its inception in May 2014. We were able to generate large returns even by identifying short candidates. Our portfolio of short stocks lost 25.7% since February 2017 (through September 30th) even though the market was up more than 33% during the same period. We just shared a list of 10 short targets in our latest quarterly update .

Heading into the third quarter of 2019, a total of 21 of the hedge funds tracked by Insider Monkey were long this stock, a change of -9% from the first quarter of 2019. On the other hand, there were a total of 16 hedge funds with a bullish position in IRWD a year ago. With hedge funds’ positions undergoing their usual ebb and flow, there exists a select group of notable hedge fund managers who were boosting their holdings meaningfully (or already accumulated large positions). 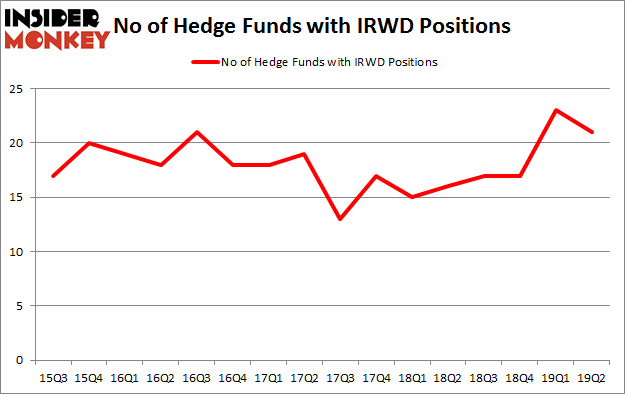 Due to the fact that Ironwood Pharmaceuticals, Inc. (NASDAQ:IRWD) has experienced bearish sentiment from the aggregate hedge fund industry, logic holds that there exists a select few hedge funds that elected to cut their positions entirely by the end of the second quarter. Intriguingly, Roberto Mignone’s Bridger Management dumped the biggest stake of the 750 funds followed by Insider Monkey, worth close to $56.6 million in call options. Oleg Nodelman’s fund, EcoR1 Capital, also dropped its call options, about $14.7 million worth. These bearish behaviors are interesting, as aggregate hedge fund interest dropped by 2 funds by the end of the second quarter.