Before we spend days researching a stock idea we like to take a look at how hedge funds and billionaire investors recently traded that stock. Russell 2000 ETF (IWM) lagged the larger S&P 500 ETF (SPY) by more than 10 percentage points since the end of the third quarter of 2018. This means hedge funds that are allocating a higher percentage of their portfolio to small-cap stocks were probably underperforming the market. However, this also means that as small-cap stocks start to mean revert, these hedge funds will start delivering better returns than the S&P 500 Index funds. In this article, we will take a look at what hedge funds think about General Finance Corporation (NASDAQ:GFN).

General Finance Corporation (NASDAQ:GFN) has experienced a decrease in support from the world’s most elite money managers of late. Our calculations also showed that GFN isn’t among the 30 most popular stocks among hedge funds (see the video below).

In addition to following the biggest hedge funds for investment ideas, we also share stock pitches from conferences, investor letters and other sources  like this one where the fund manager is talking about two under the radar 1000% return potential stocks: first one in internet infrastructure and the second in the heart of advertising market. We use hedge fund buy/sell signals to determine whether to conduct in-depth analysis of these stock ideas which take days. Let’s take a gander at the new hedge fund action surrounding General Finance Corporation (NASDAQ:GFN).

What have hedge funds been doing with General Finance Corporation (NASDAQ:GFN)?

At Q2’s end, a total of 5 of the hedge funds tracked by Insider Monkey held long positions in this stock, a change of -29% from the first quarter of 2019. Below, you can check out the change in hedge fund sentiment towards GFN over the last 16 quarters. With hedge funds’ positions undergoing their usual ebb and flow, there exists a select group of key hedge fund managers who were boosting their holdings meaningfully (or already accumulated large positions). 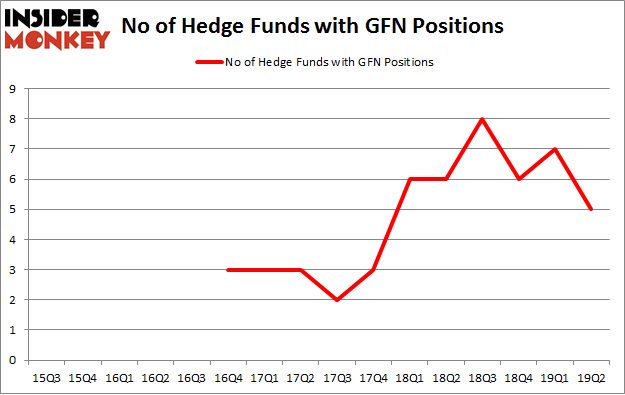 The largest stake in General Finance Corporation (NASDAQ:GFN) was held by Renaissance Technologies, which reported holding $6.5 million worth of stock at the end of March. It was followed by Royce & Associates with a $0.7 million position. Other investors bullish on the company included Two Sigma Advisors, Fondren Management, and Millennium Management.

Due to the fact that General Finance Corporation (NASDAQ:GFN) has experienced declining sentiment from hedge fund managers, it’s safe to say that there exists a select few money managers who were dropping their full holdings heading into Q3. It’s worth mentioning that Peter Rathjens, Bruce Clarke and John Campbell’s Arrowstreet Capital sold off the biggest position of all the hedgies monitored by Insider Monkey, valued at about $0.8 million in stock. Paul Marshall and Ian Wace’s fund, Marshall Wace LLP, also cut its stock, about $0.1 million worth. These transactions are interesting, as total hedge fund interest was cut by 2 funds heading into Q3.

As you can see these stocks had an average of 3.5 hedge funds with bullish positions and the average amount invested in these stocks was $11 million. That figure was $8 million in GFN’s case. Northrim BanCorp, Inc. (NASDAQ:NRIM) is the most popular stock in this table. On the other hand LCNB Corp. (NASDAQ:LCNB) is the least popular one with only 1 bullish hedge fund positions. General Finance Corporation (NASDAQ:GFN) is not the most popular stock in this group but hedge fund interest is still above average. Our calculations showed that top 20 most popular stocks among hedge funds returned 24.4% in 2019 through September 30th and outperformed the S&P 500 ETF (SPY) by 4 percentage points. Hedge funds were also right about betting on GFN, though not to the same extent, as the stock returned 5.6% during the third quarter and outperformed the market as well.