CapStar Financial Holdings, Inc. (NASDAQ:CSTR) has experienced a decrease in support from the world’s most elite money managers recently. Our calculations also showed that CSTR isn’t among the 30 most popular stocks among hedge funds (see the video below).

In addition to following the biggest hedge funds for investment ideas, we also share stock pitches from conferences, investor letters and other sources  like this one where the fund manager is talking about two under the radar 1000% return potential stocks: first one in internet infrastructure and the second in the heart of advertising market. We use hedge fund buy/sell signals to determine whether to conduct in-depth analysis of these stock ideas which take days. Now we’re going to take a look at the key hedge fund action encompassing CapStar Financial Holdings, Inc. (NASDAQ:CSTR).

How have hedgies been trading CapStar Financial Holdings, Inc. (NASDAQ:CSTR)? 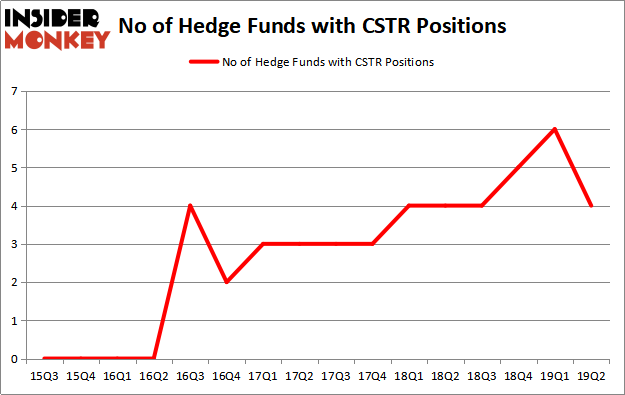 When looking at the institutional investors followed by Insider Monkey, Corsair Capital LLC, managed by D.T. Ignacio Jayanti, holds the biggest position in CapStar Financial Holdings, Inc. (NASDAQ:CSTR). Corsair Capital LLC has a $10.1 million position in the stock, comprising 15.9% of its 13F portfolio. The second most bullish fund manager is Fred Cummings of Elizabeth Park Capital Management, with a $5.2 million position; the fund has 2.1% of its 13F portfolio invested in the stock. Some other members of the smart money that are bullish encompass Renaissance Technologies, and Joe Huber’s Huber Capital Management.

Because CapStar Financial Holdings, Inc. (NASDAQ:CSTR) has faced falling interest from the aggregate hedge fund industry, it’s safe to say that there lies a certain “tier” of hedge funds that elected to cut their positions entirely last quarter. Intriguingly, Israel Englander’s Millennium Management cut the biggest investment of all the hedgies watched by Insider Monkey, valued at close to $0.3 million in stock. Paul Marshall and Ian Wace’s fund, Marshall Wace LLP, also sold off its stock, about $0 million worth. These transactions are interesting, as aggregate hedge fund interest fell by 2 funds last quarter.

As you can see these stocks had an average of 6.25 hedge funds with bullish positions and the average amount invested in these stocks was $28 million. That figure was $18 million in CSTR’s case. Atlantic Power Corp (NYSE:AT) is the most popular stock in this table. On the other hand Provident Bancorp, Inc. (NASDAQ:PVBC) is the least popular one with only 2 bullish hedge fund positions. CapStar Financial Holdings, Inc. (NASDAQ:CSTR) is not the least popular stock in this group but hedge fund interest is still below average. Our calculations showed that top 20 most popular stocks among hedge funds returned 24.4% in 2019 through September 30th and outperformed the S&P 500 ETF (SPY) by 4 percentage points. A small number of hedge funds were also right about betting on CSTR as the stock returned 9.8% during the same time frame and outperformed the market by an even larger margin.