The elite funds run by legendary investors such as Dan Loeb and David Tepper make hundreds of millions of dollars for themselves and their investors by spending enormous resources doing research on small-cap stocks that big investment banks don’t follow. Because of their pay structures, they have strong incentive to do the research necessary to beat the market. That’s why we pay close attention to what they think in small-cap stocks. In this article, we take a closer look at Mondelez International Inc (NASDAQ:MDLZ) from the perspective of those elite funds.

Hedge fund ownership of Mondelez International Inc (NASDAQ:MDLZ) remains well off early-2017 levels, when over 60 hedge funds tracked by Insider Monkey’s database owned shares of the snacks and beverages giant. The company recently lost another bull, as billionaire Bill Ackman sold off his fund Pershing Square’s $671 million position in the company during Q3.

“We initially invested in Mondelez because we believed it to be a high quality, defensive business with a meaningful opportunity to increase efficiency that was also an excellent merger candidate in a sector ripe for consolidation. While the company achieved margin expansion in-line with our original thesis, a combination of lower than expected organic growth and higher interest rates led to a reduced price-earnings multiple for Mondelez and, to an even greater extent, the broader packaged food sector,” Ackman wrote in Pershing Square’s Q3 investor letter.

Today there are plenty of tools shareholders employ to size up publicly traded companies. A pair of the most useful tools are hedge fund and insider trading sentiment. Our experts have shown that, historically, those who follow the top picks of the elite investment managers can outclass the S&P 500 by a superb margin (see the details here).

At Q3’s end, a total of 46 of the hedge funds tracked by Insider Monkey were bullish on this stock, a 2% boost from one quarter earlier. The graph below displays the number of hedge funds with bullish position in MDLZ over the last 7 quarters. With the smart money’s sentiment swirling, there exists a few noteworthy hedge fund managers who were increasing their stakes considerably (or already accumulated large positions). 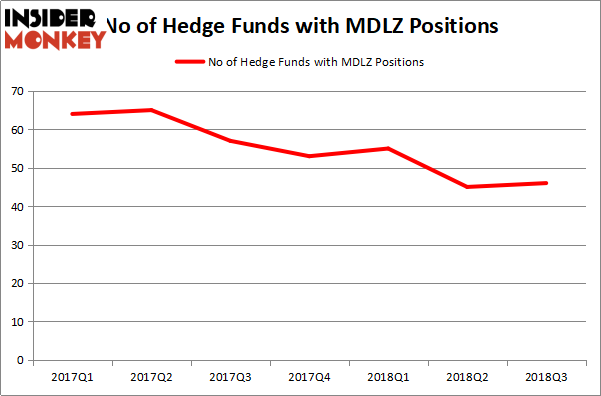 Among these funds, Trian Partners held the most valuable stake in Mondelez International Inc (NASDAQ:MDLZ), which was worth $808.7 million at the end of the second quarter. On the second spot was D E Shaw which amassed $297.3 million worth of shares. Moreover, First Pacific Advisors LLC, Two Sigma Advisors, and OZ Management were also bullish on Mondelez International Inc (NASDAQ:MDLZ), allocating a large percentage of their portfolios to this stock.

As you can see these stocks had an average of 37 hedge funds with bullish positions and the average amount invested in these stocks was $1.55 billion. That figure was $2.50 billion in MDLZ’s case. Celgene Corporation (NASDAQ:CELG) is the most popular stock in this table. On the other hand Enterprise Products Partners L.P. (NYSE:EPD) is the least popular one with only 22 bullish hedge fund positions. Mondelez International Inc (NASDAQ:MDLZ) is not the most popular stock in this group but hedge fund interest is still above average. This is a slightly positive signal but we’d rather spend our time researching stocks that hedge funds love the most, like CELG.