Insider Monkey has processed numerous 13F filings of hedge funds and successful value investors to create an extensive database of hedge fund holdings. The 13F filings show the hedge funds’ and successful investors’ positions as of the end of the second quarter. You can find articles about an individual hedge fund’s trades on numerous financial news websites. However, in this article we will take a look at their collective moves over the last 5 years and analyze what the smart money thinks of SEI Investments Company (NASDAQ:SEIC) based on that data and determine whether they were really smart about the stock.

SEI Investments Company (NASDAQ:SEIC) was in 37 hedge funds’ portfolios at the end of June. The all time high for this statistics is 33. This means the bullish number of hedge fund positions in this stock currently sits at its all time high. SEIC shareholders have witnessed an increase in hedge fund sentiment in recent months. There were 33 hedge funds in our database with SEIC holdings at the end of March. Our calculations also showed that SEIC isn’t among the 30 most popular stocks among hedge funds (click for Q2 rankings and see the video for a quick look at the top 5 stocks).

At Insider Monkey we scour multiple sources to uncover the next great investment idea. For example, Federal Reserve has been creating trillions of dollars electronically to keep the interest rates near zero. We believe this will lead to inflation and boost precious metals prices. So, we are checking out this junior gold mining stock. Legal marijuana is one of the fastest growing industries right now, so we are checking out stock pitches like “the Starbucks of cannabis” to identify the next tenbagger. We read hedge fund investor letters and listen to stock pitches at hedge fund conferences. We go through lists like the 10 most profitable companies in the world to pick the best large-cap stocks to buy. Even though we recommend positions in only a tiny fraction of the companies we analyze, we check out as many stocks as we can. With all of this in mind let’s check out the key hedge fund action regarding SEI Investments Company (NASDAQ:SEIC).

What have hedge funds been doing with SEI Investments Company (NASDAQ:SEIC)?

At the end of the second quarter, a total of 37 of the hedge funds tracked by Insider Monkey were long this stock, a change of 12% from the previous quarter. By comparison, 22 hedge funds held shares or bullish call options in SEIC a year ago. With hedgies’ sentiment swirling, there exists a few noteworthy hedge fund managers who were upping their holdings considerably (or already accumulated large positions). 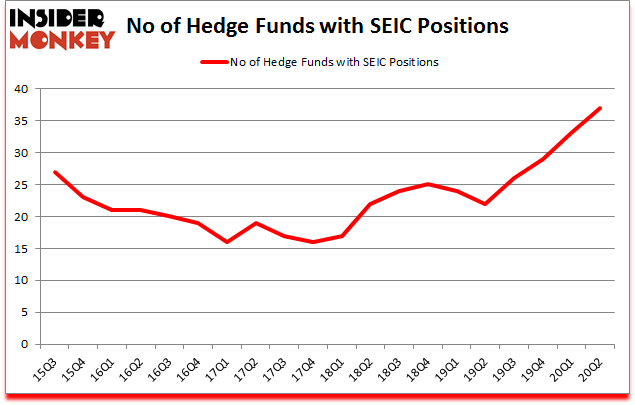 Among these funds, Citadel Investment Group held the most valuable stake in SEI Investments Company (NASDAQ:SEIC), which was worth $38.8 million at the end of the third quarter. On the second spot was Royce & Associates which amassed $25.1 million worth of shares. Millennium Management, Arrowstreet Capital, and Markel Gayner Asset Management were also very fond of the stock, becoming one of the largest hedge fund holders of the company. In terms of the portfolio weights assigned to each position Phoenician Capital allocated the biggest weight to SEI Investments Company (NASDAQ:SEIC), around 5.3% of its 13F portfolio. Goodnow Investment Group is also relatively very bullish on the stock, earmarking 2.35 percent of its 13F equity portfolio to SEIC.

Consequently, key money managers have jumped into SEI Investments Company (NASDAQ:SEIC) headfirst. Phoenician Capital, managed by John Khabbaz, assembled the most outsized position in SEI Investments Company (NASDAQ:SEIC). Phoenician Capital had $8.2 million invested in the company at the end of the quarter. Donald Sussman’s Paloma Partners also made a $3.5 million investment in the stock during the quarter. The other funds with brand new SEIC positions are Michael Gelband’s ExodusPoint Capital, Parvinder Thiara’s Athanor Capital, and Benjamin A. Smith’s Laurion Capital Management.

As you can see these stocks had an average of 25 hedge funds with bullish positions and the average amount invested in these stocks was $658 million. That figure was $234 million in SEIC’s case. 58.com Inc (NYSE:WUBA) is the most popular stock in this table. On the other hand InterContinental Hotels Group PLC (NYSE:IHG) is the least popular one with only 5 bullish hedge fund positions. Compared to these stocks SEI Investments Company (NASDAQ:SEIC) is more popular among hedge funds. Our overall hedge fund sentiment score for SEIC is 89. Stocks with higher number of hedge fund positions relative to other stocks as well as relative to their historical range receive a higher sentiment score. Our calculations showed that top 10 most popular stocks among hedge funds returned 41.4% in 2019 and outperformed the S&P 500 ETF (SPY) by 10.1 percentage points. These stocks gained 33% in 2020 through the end of August and still beat the market by 23.2 percentage points. Unfortunately SEIC wasn’t nearly as popular as these 10 stocks and hedge funds that were betting on SEIC were disappointed as the stock returned -4.8% since the end of the second quarter and underperformed the market. If you are interested in investing in large cap stocks with huge upside potential, you should check out the top 10 most popular stocks among hedge funds as most of these stocks already outperformed the market in 2020.

Is MGIC Investment Corporation (MTG) A Good Stock To Buy?
Monthly Newsletter Strategy
Download a free copy of our newsletter and see the details inside!
Hedge Fund Resource Center
Related News
Hedge Funds Are Crazy About Sarepta Therapeutics Inc (SRPT) Hedge Funds Are Dipping Their Toes Back Into W.R. Grace & Co. (GRA) Hedge Funds Have Never Been This Bullish On RealPage, Inc. (RP) Hedge Funds Are Coming Back To The Hershey Company (HSY) Should I Buy Tapestry, Inc. (TPR)? Is Colfax Corporation (CFX) A Good Stock To Buy? Hedge Funds Keep Buying Cimarex Energy Co (XEC) 11 Largest Beer Companies in The World in 2020 10 Most Hated Companies in America in 2020 14 Countries That Produce the Most Titanium in the World
Billionaire Hedge Funds