Yext, Inc. (NYSE:YEXT) was in 21 hedge funds’ portfolios at the end of the second quarter of 2019. YEXT has seen a decrease in support from the world’s most elite money managers lately. There were 23 hedge funds in our database with YEXT holdings at the end of the previous quarter. Our calculations also showed that YEXT isn’t among the 30 most popular stocks among hedge funds (see the video below). 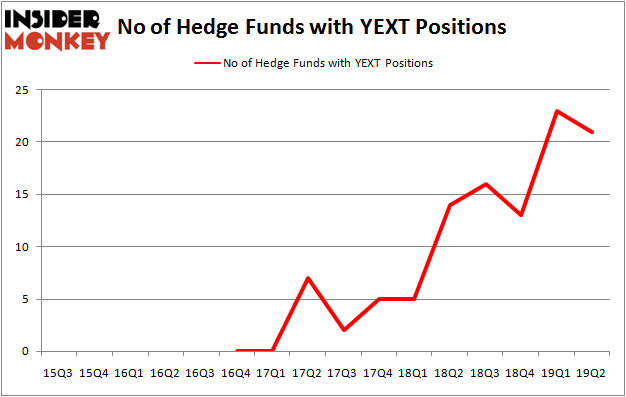 What does smart money think about Yext, Inc. (NYSE:YEXT)?

Heading into the third quarter of 2019, a total of 21 of the hedge funds tracked by Insider Monkey were bullish on this stock, a change of -9% from the previous quarter. The graph below displays the number of hedge funds with bullish position in YEXT over the last 16 quarters. With the smart money’s positions undergoing their usual ebb and flow, there exists an “upper tier” of noteworthy hedge fund managers who were increasing their holdings considerably (or already accumulated large positions).

The largest stake in Yext, Inc. (NYSE:YEXT) was held by D E Shaw, which reported holding $39.2 million worth of stock at the end of March. It was followed by Renaissance Technologies with a $32.4 million position. Other investors bullish on the company included Polar Capital, Two Sigma Advisors, and Whetstone Capital Advisors.

Because Yext, Inc. (NYSE:YEXT) has experienced bearish sentiment from the aggregate hedge fund industry, logic holds that there is a sect of funds that elected to cut their positions entirely by the end of the second quarter. It’s worth mentioning that Jeffrey Talpins’s Element Capital Management dumped the largest position of the 750 funds watched by Insider Monkey, valued at close to $20 million in stock, and Ken Griffin’s Citadel Investment Group was right behind this move, as the fund sold off about $7 million worth. These bearish behaviors are intriguing to say the least, as aggregate hedge fund interest fell by 2 funds by the end of the second quarter.