Insider Monkey has processed numerous 13F filings of hedge funds and famous investors to create an extensive database of hedge fund holdings. The 13F filings show the hedge funds and investors’ positions as of the end of the third quarter. You can find write-ups about an individual hedge fund’s trades on numerous financial news websites. However, in this article we will take a look at their collective moves and analyze what the smart money thinks of Yandex NV (NASDAQ:YNDX) based on that data.

Is Yandex NV (NASDAQ:YNDX) ready to rally soon? Prominent investors are in a pessimistic mood. The number of long hedge fund positions were trimmed by 1 recently. Our calculations also showed that YNDX isn’t among the 30 most popular stocks among hedge funds.

How have hedgies been trading Yandex NV (NASDAQ:YNDX)?

At Q3’s end, a total of 37 of the hedge funds tracked by Insider Monkey were bullish on this stock, a change of -3% from the second quarter of 2018. By comparison, 44 hedge funds held shares or bullish call options in YNDX heading into this year. With hedge funds’ sentiment swirling, there exists a few noteworthy hedge fund managers who were adding to their holdings substantially (or already accumulated large positions). 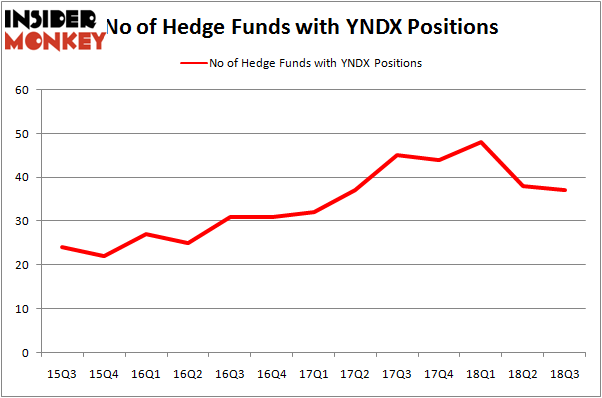 Among these funds, Sachem Head Capital held the most valuable stake in Yandex NV (NASDAQ:YNDX), which was worth $142.6 million at the end of the third quarter. On the second spot was Cadian Capital which amassed $133.1 million worth of shares. Moreover, Light Street Capital, OZ Management, and Melvin Capital Management were also bullish on Yandex NV (NASDAQ:YNDX), allocating a large percentage of their portfolios to this stock.

Due to the fact that Yandex NV (NASDAQ:YNDX) has witnessed declining sentiment from the aggregate hedge fund industry, we can see that there exists a select few funds that decided to sell off their positions entirely by the end of the third quarter. Intriguingly, Robert Boucai’s Newbrook Capital Advisors dumped the biggest investment of the “upper crust” of funds tracked by Insider Monkey, comprising an estimated $109.1 million in call options. Gabriel Plotkin’s fund, Melvin Capital Management, also dropped its call options, about $108.5 million worth. These transactions are interesting, as total hedge fund interest dropped by 1 funds by the end of the third quarter.

As you can see these stocks had an average of 26.5 hedge funds with bullish positions and the average amount invested in these stocks was $866 million. That figure was $985 million in YNDX’s case. Sarepta Therapeutics Inc (NASDAQ:SRPT) is the most popular stock in this table. On the other hand Westlake Chemical Corporation (NYSE:WLK) is the least popular one with only 19 bullish hedge fund positions. Yandex NV (NASDAQ:YNDX) is not the most popular stock in this group but hedge fund interest is still above average. This is a slightly positive signal but we’d rather spend our time researching stocks that hedge funds are piling on. In this regard SRPT might be a better candidate to consider a long position.