Most investors tend to think that hedge funds and other asset managers are worthless, as they cannot beat even simple index fund portfolios. In fact, most people expect hedge funds to compete with and outperform the bull market that we have witnessed over the past few years. However, hedge funds are generally partially hedged and aim at delivering attractive risk-adjusted returns rather than following the ups and downs of equity markets hoping that they will outperform the broader market. Our research shows that hedge funds do have great stock picking skills, so let’s take a glance at the smart money sentiment towards SUPERVALU INC. (NYSE:SVU).

Is SUPERVALU INC. a buy, sell, or hold? Money managers are getting less bullish. The number of long hedge fund bets decreased by 1 recently. Our calculations also showed that SVU isn’t among the 30 most popular stocks among hedge funds. SVU was in 17 hedge funds’ portfolios at the end of September. There were 18 hedge funds in our database with SVU positions at the end of the previous quarter.

While collecting data for our write-up, we came across Miller Value Partners’ third-quarter 2018 letter to shareholders, that gives its opinion on SUPERVALU. The fund has a large position in the company and had this to say in the letter:

“One of our largest holdings, Supervalu (SVU) was acquired by United Natural Foods (UNFI), for $32.50/share. The acquisition price was 65%+ higher than SVU’s previous day’s closing price. Supervalu’s valuable real estate holdings and extensive distribution network supported an intrinsic value that was significantly higher than their market price.”

Our readers will be interested to know that Ms. Francesca Ruiz de Luzuriaga, a director of the company, was responsible for the last major purchase of the company’s common stock, snapping up 5,000 shares at $6.41.

What does the smart money think about SUPERVALU INC. (NYSE:SVU)?

Heading into the fourth quarter of 2018, a total of 17 of the hedge funds tracked by Insider Monkey were long this stock, a change of -6% from the second quarter of 2018. The graph below displays the number of hedge funds with a bullish position in SVU over the last 13 quarters. With hedge funds’ positions undergoing their usual ebb and flow, there exists a select group of noteworthy hedge fund managers who were upping their stakes substantially (or already accumulated large positions). 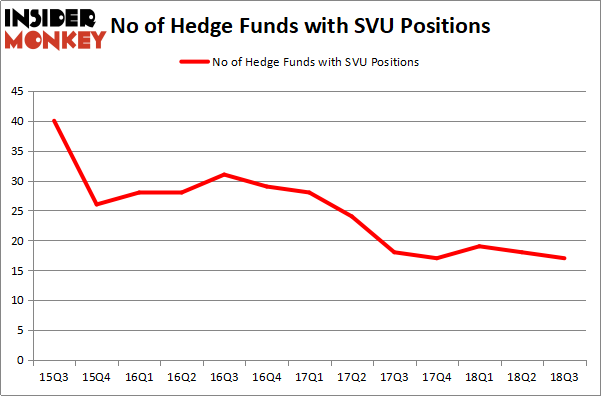 More specifically, Magnetar Capital was the largest shareholder of SUPERVALU INC. (NYSE:SVU), with a stake worth $80.2 million reported as of the end of September. Trailing Magnetar Capital was Water Island Capital, which amassed a stake valued at $18.3 million. Alpine Associates, Renaissance Technologies, and Royce & Associates were also very fond of the stock, giving the stock large weights in their portfolios.

Since SUPERVALU INC. (NYSE:SVU) has experienced declining sentiment from the entirety of the hedge funds we track, it’s easy to see that there is a sect of money managers who sold off their full holdings by the end of the third quarter. At the top of the heap, David Atterbury’s Whetstone Capital Advisors cut the largest investment of the “upper crust” of funds monitored by Insider Monkey, worth about $6.1 million in stock. Boaz Weinstein’s fund, Saba Capital, also dropped its stock, about $2.5 million worth. These bearish behaviors are important to note, as aggregate hedge fund interest dropped by 1 fund by the end of the third quarter.

As you can see these stocks had an average of 11.75 hedge funds with bullish positions and the average amount invested in these stocks was $85 million. That figure was $161 million in SVU’s case. AtriCure Inc. (NASDAQ:ATRC) is the most popular stock in this table. On the other hand, AllianzGI NFJ Dividend, Interest & Premium Strategy Fund (NYSE:NFJ) is the least popular one with only 4 bullish hedge fund positions. SUPERVALU INC. (NYSE:SVU) is not the most popular stock in this group but hedge fund interest is still above average. This is a slightly positive signal but we’d rather spend our time researching stocks that hedge funds are piling on. In this regard, ATRC might be a better candidate to consider a long position.

Public Service Enterprise Group Incorporated (PEG) Hedge Funds Are Snapping...
Monthly Newsletter Strategy
Download a free copy of our newsletter and see the details inside!
Hedge Fund Resource Center
Related News
Top 10 Largest Grocery Store Chains In America 31 Stories To Find Out How Is It Going In The Financial Markets Today What Is Going On In The Financial Markets Today? Five Stocks Under $5 to Buy Now Is SUPERVALU INC. (SVU) a Good Stock To Buy? Lonestar Capital Had Impressive Q3 Gains as Its Bets on Berry Plastics Group Inc (BERY) and Other Stocks Paid Off Why Morgan Stanley, Halliburton Company, Canadian Pacific, and Two Other Stocks Are Trending Today Five Reasons You Need a Day-Trading Mentor 15 Most Important Medical Discoveries of 2018 The 10 Best Islands to Visit in 2019
Billionaire Hedge Funds