The Insider Monkey team has completed processing the quarterly 13F filings for the September quarter submitted by the hedge funds and other money managers included in our extensive database. Most hedge fund investors endured a torrid quarter, which certainly propelled them to adjust their equity holdings so as to maintain the desired risk profile. As a result, the relevancy of these public filings and their content is indisputable, as they may reveal numerous high-potential stocks. The following article will discuss the smart money sentiment towards Select Medical Holdings Corporation (NYSE:SEM).

Select Medical Holdings Corporation (NYSE:SEM) investors should pay attention to a decrease in hedge fund interest of late. Our calculations also showed that SEM isn’t among the 30 most popular stocks among hedge funds.

What have hedge funds been doing with Select Medical Holdings Corporation (NYSE:SEM)?

At the end of the third quarter, a total of 19 of the hedge funds tracked by Insider Monkey held long positions in this stock, a change of -5% from one quarter earlier. The graph below displays the number of hedge funds with bullish position in SEM over the last 13 quarters. With the smart money’s sentiment swirling, there exists a select group of key hedge fund managers who were adding to their holdings considerably (or already accumulated large positions). 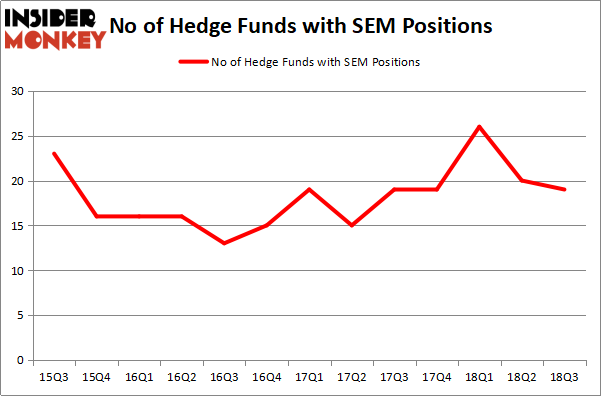 Since Select Medical Holdings Corporation (NYSE:SEM) has experienced bearish sentiment from the smart money, it’s safe to say that there is a sect of hedgies that elected to cut their entire stakes last quarter. Intriguingly, Peter Rathjens, Bruce Clarke and John Campbell’s Arrowstreet Capital dumped the largest investment of the “upper crust” of funds followed by Insider Monkey, valued at close to $2 million in stock. Benjamin A. Smith’s fund, Laurion Capital Management, also cut its stock, about $0.3 million worth. These transactions are important to note, as aggregate hedge fund interest fell by 1 funds last quarter.

As you can see these stocks had an average of 15.75 hedge funds with bullish positions and the average amount invested in these stocks was $302 million. That figure was $196 million in SEM’s case. SeaDrill Limited (NYSE:SDRL) is the most popular stock in this table. On the other hand Brooks Automation, Inc. (NASDAQ:BRKS) is the least popular one with only 12 bullish hedge fund positions. Select Medical Holdings Corporation (NYSE:SEM) is not the most popular stock in this group but hedge fund interest is still above average. This is a slightly positive signal but we’d rather spend our time researching stocks that hedge funds are piling on. In this regard SDRL might be a better candidate to consider a long position.