As we already know from media reports and hedge fund investor letters, many hedge funds lost money in October, blaming macroeconomic conditions and unpredictable events that hit several sectors, with healthcare among them. Nevertheless, most investors decided to stick to their bullish theses and their long-term focus allows us to profit from the recent declines. In particular, let’s take a look at what hedge funds think about Quidel Corporation (NASDAQ:QDEL) in this article.

Quidel Corporation (NASDAQ:QDEL) has experienced a decrease in activity from the world’s largest hedge funds recently. Our calculations also showed that qdel isn’t among the 30 most popular stocks among hedge funds.

To the average investor there are many gauges stock traders use to appraise publicly traded companies. Some of the most innovative gauges are hedge fund and insider trading signals. Our researchers have shown that, historically, those who follow the best picks of the top hedge fund managers can beat the S&P 500 by a solid amount (see the details here).

We’re going to take a look at the recent hedge fund action regarding Quidel Corporation (NASDAQ:QDEL).

At the end of the third quarter, a total of 15 of the hedge funds tracked by Insider Monkey held long positions in this stock, a change of -12% from the previous quarter. The graph below displays the number of hedge funds with bullish position in QDEL over the last 13 quarters. With hedgies’ capital changing hands, there exists a select group of key hedge fund managers who were upping their stakes significantly (or already accumulated large positions). 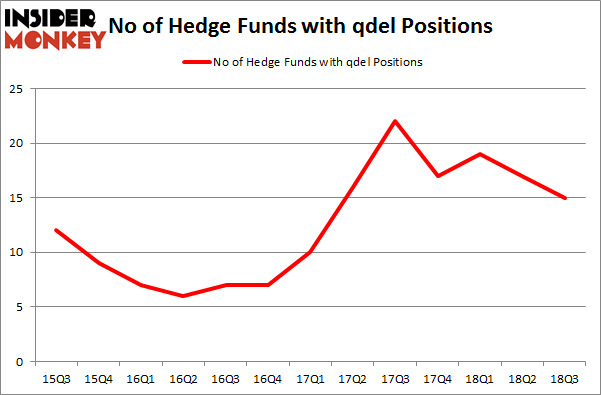 More specifically, GAMCO Investors was the largest shareholder of Quidel Corporation (NASDAQ:QDEL), with a stake worth $33.1 million reported as of the end of September. Trailing GAMCO Investors was Renaissance Technologies, which amassed a stake valued at $28.3 million. Millennium Management, D E Shaw, and Two Sigma Advisors were also very fond of the stock, giving the stock large weights in their portfolios.

Because Quidel Corporation (NASDAQ:QDEL) has experienced bearish sentiment from the aggregate hedge fund industry, it’s safe to say that there is a sect of hedge funds that elected to cut their entire stakes by the end of the third quarter. Interestingly, Steve Cohen’s Point72 Asset Management said goodbye to the biggest stake of the “upper crust” of funds monitored by Insider Monkey, valued at about $6.8 million in stock, and Howard Marks’s Oaktree Capital Management was right behind this move, as the fund said goodbye to about $6.6 million worth. These transactions are intriguing to say the least, as total hedge fund interest dropped by 2 funds by the end of the third quarter.

As you can see these stocks had an average of 16 hedge funds with bullish positions and the average amount invested in these stocks was $458 million. That figure was $132 million in QDEL’s case. Sotheby’s (NYSE:BID) is the most popular stock in this table. On the other hand Union Bankshares Corporation (NASDAQ:UBSH) is the least popular one with only 4 bullish hedge fund positions. Quidel Corporation (NASDAQ:QDEL) is not the least popular stock in this group but hedge fund interest is still below average. This is a slightly negative signal and we’d rather spend our time researching stocks that hedge funds are piling on. In this regard BID might be a better candidate to consider a long position.