Hedge funds and large money managers usually invest with a focus on the long-term horizon and, therefore, short-lived dips or bumps on the charts, usually don’t make them change their opinion towards a company. This time it may be different. During the fourth quarter of 2018 we observed increased volatility and small-cap stocks underperformed the market. Things completely reversed during the first half of 2019. Hedge fund investor letters indicated that they are cutting their overall exposure, closing out some position and doubling down on others. Let’s take a look at the hedge fund sentiment towards Nucor Corporation (NYSE:NUE) to find out whether it was one of their high conviction long-term ideas.

Is Nucor Corporation (NYSE:NUE) going to take off soon? Investors who are in the know are taking a bearish view. The number of bullish hedge fund bets were trimmed by 4 recently. Our calculations also showed that NUE isn’t among the 30 most popular stocks among hedge funds (view the video below). NUE was in 22 hedge funds’ portfolios at the end of June. There were 26 hedge funds in our database with NUE holdings at the end of the previous quarter.

To most stock holders, hedge funds are assumed to be worthless, old financial vehicles of years past. While there are greater than 8000 funds in operation at present, We hone in on the elite of this club, approximately 750 funds. These money managers administer most of the hedge fund industry’s total capital, and by paying attention to their top picks, Insider Monkey has formulated a number of investment strategies that have historically exceeded the S&P 500 index. Insider Monkey’s flagship hedge fund strategy exceeded the S&P 500 index by around 5 percentage points per year since its inception in May 2014. We were able to generate large returns even by identifying short candidates. Our portfolio of short stocks lost 25.7% since February 2017 (through September 30th) even though the market was up more than 33% during the same period. We just shared a list of 10 short targets in our latest quarterly update . 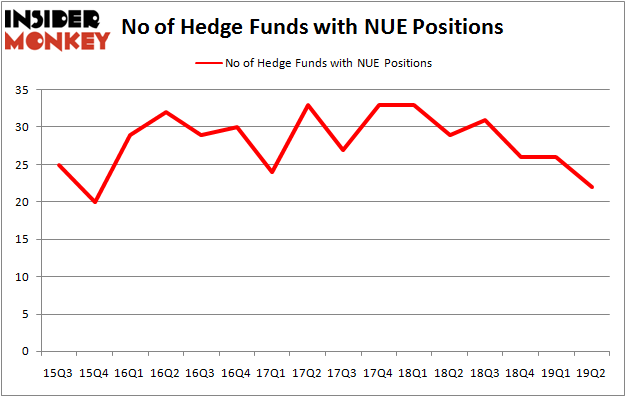 Unlike some fund managers who are betting on Dow reaching 40000 in a year, our long-short investment strategy doesn’t rely on bull markets to deliver double digit returns. We only rely on hedge fund buy/sell signals. Let’s take a gander at the latest hedge fund action regarding Nucor Corporation (NYSE:NUE).

At Q2’s end, a total of 22 of the hedge funds tracked by Insider Monkey were bullish on this stock, a change of -15% from one quarter earlier. On the other hand, there were a total of 29 hedge funds with a bullish position in NUE a year ago. With hedge funds’ positions undergoing their usual ebb and flow, there exists a few key hedge fund managers who were adding to their holdings substantially (or already accumulated large positions).

According to publicly available hedge fund and institutional investor holdings data compiled by Insider Monkey, Citadel Investment Group, managed by Ken Griffin, holds the largest position in Nucor Corporation (NYSE:NUE). Citadel Investment Group has a $59.3 million position in the stock, comprising less than 0.1%% of its 13F portfolio. Sitting at the No. 2 spot is Cliff Asness of AQR Capital Management, with a $40.5 million position; the fund has less than 0.1%% of its 13F portfolio invested in the stock. Some other peers that hold long positions encompass Ray Dalio’s Bridgewater Associates, and John Overdeck and David Siegel’s Two Sigma Advisors.

Because Nucor Corporation (NYSE:NUE) has witnessed a decline in interest from the entirety of the hedge funds we track, logic holds that there exists a select few money managers that elected to cut their full holdings by the end of the second quarter. It’s worth mentioning that Jonathan Barrett and Paul Segal’s Luminus Management dumped the biggest position of the “upper crust” of funds followed by Insider Monkey, worth an estimated $39.8 million in stock, and Matthew Tewksbury’s Stevens Capital Management was right behind this move, as the fund said goodbye to about $8.6 million worth. These moves are interesting, as aggregate hedge fund interest was cut by 4 funds by the end of the second quarter.

As you can see these stocks had an average of 31.25 hedge funds with bullish positions and the average amount invested in these stocks was $1262 million. That figure was $238 million in NUE’s case. Altice USA, Inc. (NYSE:ATUS) is the most popular stock in this table. On the other hand CMS Energy Corporation (NYSE:CMS) is the least popular one with only 22 bullish hedge fund positions. Compared to these stocks Nucor Corporation (NYSE:NUE) is even less popular than CMS. Hedge funds dodged a bullet by taking a bearish stance towards NUE. Our calculations showed that the top 20 most popular hedge fund stocks returned 24.4% in 2019 through September 30th and outperformed the S&P 500 ETF (SPY) by 4 percentage points. Unfortunately NUE wasn’t nearly as popular as these 20 stocks (hedge fund sentiment was very bearish); NUE investors were disappointed as the stock returned -6.9% during the third quarter and underperformed the market. If you are interested in investing in large cap stocks with huge upside potential, you should check out the top 20 most popular stocks among hedge funds as many of these stocks already outperformed the market so far in 2019.