Is Myriad Genetics, Inc. (NASDAQ:MYGN) a good investment right now? Investors who are in the know are turning less bullish. The number of bullish hedge fund positions decreased by 2 recently. Our calculations also showed that MYGN isn’t among the 30 most popular stocks among hedge funds (view the video below).

How have hedgies been trading Myriad Genetics, Inc. (NASDAQ:MYGN)?

Heading into the third quarter of 2019, a total of 15 of the hedge funds tracked by Insider Monkey were bullish on this stock, a change of -12% from one quarter earlier. Below, you can check out the change in hedge fund sentiment towards MYGN over the last 16 quarters. With the smart money’s capital changing hands, there exists an “upper tier” of key hedge fund managers who were upping their holdings substantially (or already accumulated large positions). 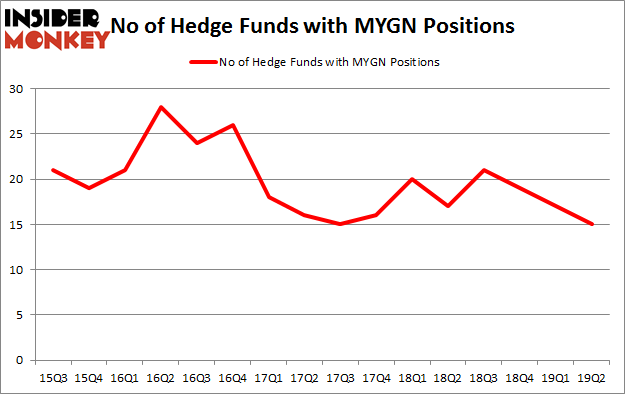 When looking at the institutional investors followed by Insider Monkey, D. E. Shaw’s D E Shaw has the largest position in Myriad Genetics, Inc. (NASDAQ:MYGN), worth close to $92.3 million, comprising 0.1% of its total 13F portfolio. Sitting at the No. 2 spot is Millennium Management, managed by Israel Englander, which holds a $47.7 million position; 0.1% of its 13F portfolio is allocated to the company. Some other members of the smart money that are bullish include Steve Cohen’s Point72 Asset Management, Ken Grossman and Glen Schneider’s SG Capital Management and Cliff Asness’s AQR Capital Management.

Seeing as Myriad Genetics, Inc. (NASDAQ:MYGN) has experienced a decline in interest from hedge fund managers, it’s easy to see that there exists a select few funds that decided to sell off their entire stakes heading into Q3. Interestingly, Mitchell Blutt’s Consonance Capital Management said goodbye to the largest investment of the “upper crust” of funds followed by Insider Monkey, comprising about $109.9 million in call options. Kevin Kotler’s fund, Broadfin Capital, also dropped its call options, about $16.6 million worth. These bearish behaviors are interesting, as aggregate hedge fund interest fell by 2 funds heading into Q3.

As you can see these stocks had an average of 16.25 hedge funds with bullish positions and the average amount invested in these stocks was $236 million. That figure was $214 million in MYGN’s case. Conduent Incorporated (NYSE:CNDT) is the most popular stock in this table. On the other hand Norbord Inc. (NYSE:OSB) is the least popular one with only 6 bullish hedge fund positions. Myriad Genetics, Inc. (NASDAQ:MYGN) is not the least popular stock in this group but hedge fund interest is still below average. Our calculations showed that top 20 most popular stocks among hedge funds returned 24.4% in 2019 through September 30th and outperformed the S&P 500 ETF (SPY) by 4 percentage points. A small number of hedge funds were also right about betting on MYGN, though not to the same extent, as the stock returned 3.1% during the third quarter and outperformed the market.